Cutler continues to motivate the masses by staying active in the gym. 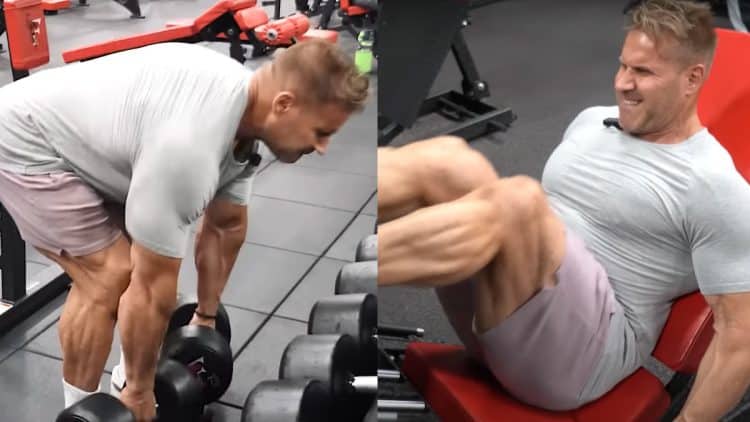 We have all come across memes that hold ‘people that never skip a leg day’ in high regard. Our legs are the biggest muscle groups in our body that help build a strong foundation to support athletic performance and a healthy locomotive pattern. Still, several people neglect leg training in favor of the more visible upper body muscles. However, bodybuilding legend Jay Cutler does not belong to this category.

Cutler is one of the greatest bodybuilders of all time. He is best known for having four Mr. Olympia title wins under his belt. The 49-year-old became Mr. Olympia for the first time by dethroning the eight-time Mr. Olympia winner Ronnie Coleman in 2006. It is considered among the greatest competitive rivalries in the history of bodybuilding. Cutler retained the top spot three more times in 2007, 2009, and 2010.

Even in retirement, Cutler continues training hard to stay in shape and leads a healthy life. Recently, he went through a high-volume leg workout and cranked out more than 30 sets of different lower body exercises. So without further delay, let’s take a closer look at the detailed account of this training session.

Jay Cutler smashes a high-volume leg workout in the gym

Cutler started his lower body workout with this isolation exercise to target the hamstrings and warm up the knee joint. He performed one warm-up set with moderate weight and then completed three working sets. Cutler performed the exercise in a slow and controlled motion and paused for a few seconds at the top before starting the next rep.

Next, the 49-year-old took to this variation of the deadlift. The most visible difference between the conventional deadlift and the stiff-legged deadlift is the leg movement. The stiff-legged variation involves maintaining a slight bend in your knees throughout the exercise, which helps engage the entire posterior chain—calves, hamstrings, glutes, lower back, and lats. Cutler performed three sets in the 12 to 15 rep range.

While speaking about his lower body training splits, Cutler said:

“I did have lagging hamstrings over Mike. When I did the best training, it was hamstrings in the morning and then quads at night. I did double split.”

“If I were training competitively, I would split my workout—I would train twice a day, always. The reason I would split is for quads. I will get more meals in later in the day. But if you are asking now, I just like isolating the smaller muscle group over the larger group first. My quads don’t require as much effort, to be honest.”

Cutler performed two sets of this exercise to put more emphasis on the hamstrings. He next took to arguably the best isolation exercise to work this muscle.

This served as the last exercise to isolate the hamstrings. The quads are pressed against the pad during the standing leg curl, significantly reducing the possibility of other muscles compensating for hamstrings. This exercise isolates the hamstrings to a much larger extent to bring about hypertrophy. In that regard, standing leg curls are as effective for hamstrings as preacher curls are for biceps. Cutler performed two sets of this exercise and shifted his focus to the quadriceps.

Cutler started the quad work with one of the most popular quad exercises. He performed three sets of standard leg extensions to get the blood flowing into his quads and started with compound exercises.

The four-time Mr. Olympia champion next performed this compound exercise to work the lower body. The leg press is a triple extension movement that has a concurrent hip extension, knee extension, and ankle plantar flexion. This exercise works all the lower body muscles, including quads, hamstrings, glutes, and even calves.

When asked about the rep range that he follows, Cutler said:

“I don’t count the reps. The funny thing is I never count the reps. So when I say 12 reps, I guess I am lying! I think you should push yourself to the point where you are not at failure but two to three from failure…”

“People get confused on how close they should go (to failure) when they train a lot of volume. I’m saying that when you are high-volume training, you should never go to extreme failure. If you are low volume training then yes you can push yourself to failure.”

Cutler performed two sets of this exercise and jumped on to the next one.

This served as the second compound movement of the workout. Belt squats have similar benefits for the quads, hamstrings, and calves. However, they put far less stress on the lower back than traditional back squats.

Cutler finished the workout with three sets of reverse hack squats. This exercise also works a majority of the lower body muscles. However, it also improves hip and ankle mobility which has carry-over benefits that help with other lower body lifts like deadlifts or back squats.

The 49-year-old performed three sets of reverse hack squats and wrapped up the training session.

Cutler is one of the previous generation bodybuilders that has transitioned really well into the age of social media. He is an influential social media figure and one of the prominent voices for the sport of bodybuilding. He runs the insightful Cutler Cast podcast, where he interacts with other influential figures in the bodybuilding industry and shares his bodybuilding knowledge. His workout videos and interactive sessions are a potent source of motivation for those looking to lead a healthy life or become a bodybuilder.

You can watch the full lower body workout video below, courtesy of JayCutlerTV YouTube channel: