Two of the most elite CrossFit athletes joined the World's Strongest Gay for a strength workout. 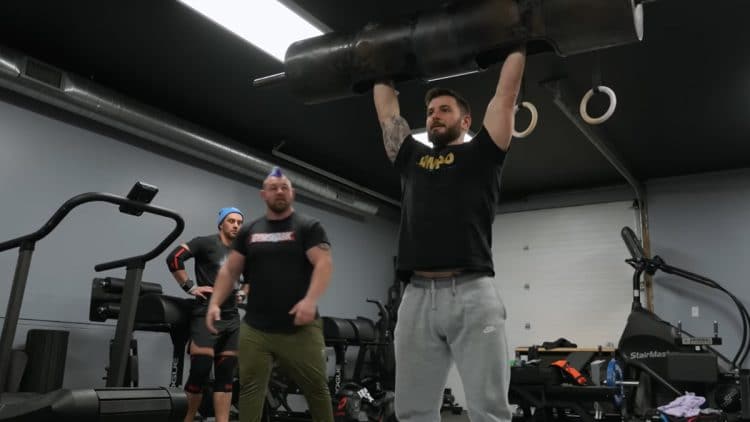 The importance of crossovers for professional athletes in any sport is not emphasized enough. Competitors of the highest level, however, understand how much they could gain. Mat Fraser, who has won the title of Fittest Man on Earth® five times, is one of those professionals, so he helped Mal O’Brien in achieving the same goal as well. The pair visited Strongman Rob Kearney at the gym this time.

Rob Kearney is known as the World’s Strongest Gay and a beast in regards to static strength events. Rob is also very happy to be in the company of athletes regardless of the sport, which he has repeatedly demonstrated. He has already performed Mat Fraser’s 500-meter row challenge, but now Mat came to visit him. Both Fraser and O’Brien learned some new skills from their interaction with Kearney, as he taught them how to perform the log lift and heavy dumbbell press.

The video was posted on Mat Fraser’s YouTube channel.

Related: Mat Fraser Opens Up On Getting Sober At 17: ‘Addictive Personality Can Be a Benefit’

The first exercise they performed was the log lift, since it is one of the most iconic Strongman movements. Rob Kearney first had to explain how to perform the exercise, as neither of them wants to get hurt while attempting the lift.

“You just have to forget everything you know about a barbell. It is more of like a deadlift, then you squeeze the log into yourself, then you want to stand up explosively while rolling a log up your chest.”

Both Mat Fraser and Mal O’Brien started out with a 90-pound log, but moved up to 140 pounds and 120 pounds, respectively. O’Brien stayed at this weight for a few sets, while Fraser continued lifting heavier.

At one point in this set, Fraser tried Jujimufu’s smelling salt and was left in a state of shock. Following that, the video shows Mal O’Brien pressing a 160-pound log, and Mat Fraser doing the same with 230 pounds. Rob Kearney took it up a notch and lifted a log of 350 pounds for four reps.

The trio then moved on to the heavy dumbbell press. CrossFitters are familiar with the movement, as dumbbell snatches are a part of many workouts. However, the size of this dumbbell made a huge difference. Rob Kearney once again explained the basics.

“So, position wise. You want the dumbbell sitting on your delt, elbow high… Some people will swing it (from the floor) into place… I actually lever it off my belt. I’ll pick it up to my belt and shoot the hips forward.”

They did not specify what weight they were doing, but their focus was purely on the technique. They did add some weight towards the end and left their final bits of energy.

Mal O’Brien and her coach, Mat Fraser, will undoubtedly utilize their newfound skills in preparation for the 2022 CrossFit Games. Although Fraser is retired from the sport, O’Brien is coming into the competition as one of the favorites. The Games are set to take place on Aug. 3-7, 2022, in Madison, WI.