Rob Kearney destroyed a 432 kg (950 lbs) equipped squat without struggling for a fraction of a second. 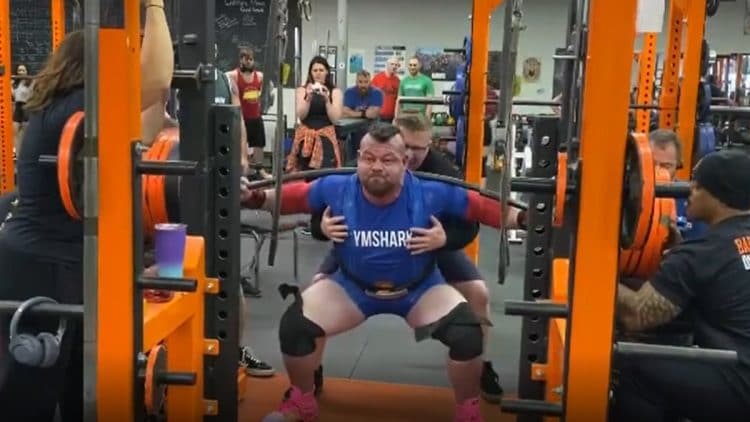 The second-biggest strongman competition is nearing, and the most elite athletes are finishing up their preparations, including Rob Kearney. The 2022 Arnold Strongman Classic (ASC) will happen in 2 weeks, and The World’s Strongest Gay has marked the end of his squat prep with a massive equipped squat single, which was posted on his official Instagram account.

Rob and his coach clearly made a really good squat training program, as he made massive progress each week and finished with a huge 432 kg (950 lbs) equipped squat. Rob did the squat with consistent speed throughout the rep, which made it look very easy for him. In the video, we can see that Rob is using a Duffalo Bar to ease the pressure on the elbows, but in the 2022 ASC, the standard bar is going to be used. The equipment (knee sleeves, suit, lifting belt) that Rob used for the squat is allowed in strongman.

The first event of the 2022 ASC will be the Max Barbell Squat, and Rob seems ready for it. In addition, two other events could really go in Rob’s favor, as his shoulder strength is incredible.

The first and most obvious one is the Austrian Oak Log Press for maximum load. Rob’s prowess in the log press is almost impossible to be matched, as he is a Former American Record Holder in the log press event. He set the record of 215.9 kg (476 lbs) at the 2020 WUS Feats of Strength – Max Log Lift.

The second event of the 2022 ASC is the 275 lbs (125 kg) Monster Dumbbell Press for repetitions, and Rob could excel at this event. Just three days ago, he posted a video of him doing a single with the same dumbbell in training.

Despite lifting heavy and looking like he is in his peak shape, Rob has suffered a lot of setbacks last year. He was diagnosed with testicular cancer, which required surgery. In addition, the beginning of last year was all about recovering from a tricep tear. We will see if Rob can continue improving his career, as he has had a lot of success until now.

Rob has been competing professionally in strongman for 7 years. He took part in three World’s Strongest Man competitions but never qualified for the finals. His closest was the 2019 WSM when he came third in his group. Rob has also pronounced the Pound-For-Pound Strongest Man In The World after taking part in Eddie Hall’s challenge.

Related: Rob Kearney Takes 386kg/850lbs For a Ride In His Best Deadlift Session Yet

Rob Kearney could come in as an underdog to make an excellent result. His recent squat was very impressive and was done with decent speed. Taking that into consideration, it is possible to see Rob squat a lot heavier in the 2022 ASC. He will definitely put on a show for all strongman fans, regardless.