Rudy Kadlub treated himself to the usual birthday deadlift while setting an unofficial world record in the process. 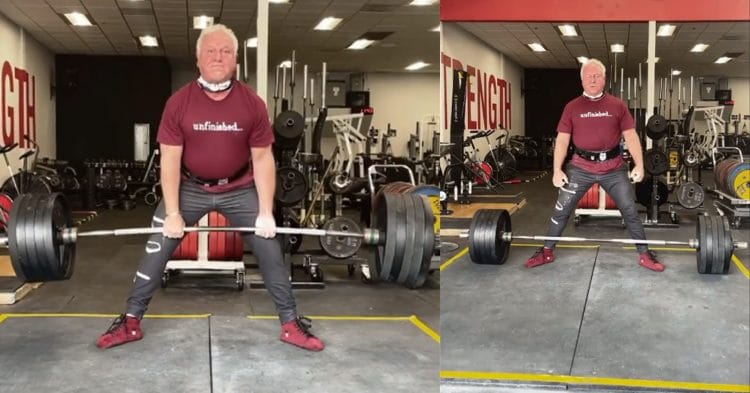 If you’ve been keeping up, you probably know that powerlifter and CEO and co-owner of Kabuki Strength Rudy kadlub has made it a tradition to deadlift on his birthday every year. Well for his 72nd birthday on April, 10, 2021, Kadlub made sure to do it in big fashion, setting an unofficial world record with an impressive 235kg/520 lb raw deadlift.

Check out the huge gift he gave to himself this year thanks to the Kabuki Strength Instagram page.

“If you’ve ever thought to yourself “…I’m too _____ to lift and get stronger” …well, get that shit out of your head right now because #ThereIsAlwaysMore“

As you could see, he didn’t have an issue moving the weight and he totally looks the part too.

Kadlub also celebrated his birthday (5 days before his actual birthday) with a 172.4kg/380 lbs squat for seven reps which was a pr for him.

Rudy Kadlub took four world records at the drug-tested North American Championships in 2020 and he will continue to compete and hopefully dominate.

Hadlub started competing at age 55 in the Master’s division which is insane and not to mention, he’s set records in different weight categories (198, 220, and 242 lbs). Throughout the span of his lifting career, he’s also set 25 American and 24 world records.

Since 2013, he hasn’t lost a single competition, and his friend and strength legend Chris Duffin has called him “the strongest 60+ year old drug-free powerlifter in the world“.

There’s no doubt he can smash this record in competition, and right now, he’s preparing for the 2021 Drug tested Nationals.