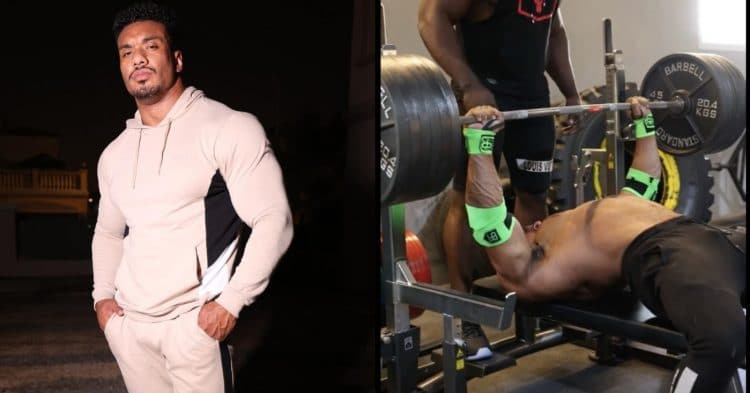 Another day, another personal record conquered at the hands of Larry Wheels. This time around, it came from an impressive bench press set, done in the gym.

It seems like every time that Wheels hits the weights, he leaves with a new personal record. Whether it be with his deadlift, squat, or some other insane lift, the PR wrecking machine never ceases to impress with his well documented ability to constantly out perform his previous showings.

This was the case once more, when Larry took to the bench for some hefty bench press action in the gym, alongside Andrew Jacked. He posted a video to his Instagram, that sees him doing a 585lb bench press, and whipping out four reps with it, to secure a new  bench press personal record.

Larry Wheels Is A Beast

It has been more than a year since the last time Larry Wheels has competed in a powerlifting meet. He was initially intending to make his competition return a few months ago, at the RPS Long Island Insurrection meet, but decided to keep working on getting back to the level he was on before he took time away from strength training to focus on arm wrestling.

While he may not quite be at the level that he once was, Larry has been making incremental progress to work his way back to that position. This bench press PR was just the most recent example of it, but there have been a ton of updates from him in recent months that show how hard he is working.

He recently revealed that he will be making a return to the world of arm wrestling, despite the fact that things have not gone his way in his most recent outings, but this time he will be taking on a fellow powerlifter. He has not stopped strength training this time around either, still putting up some impressive numbers, no matter the lift.

At every step of the way, it seems like Larry Wheels is continuing to get better and better, no matter what it is that he is working on. It is always a treat to see him hitting the weights and putting in the work to see him secure another personal record.