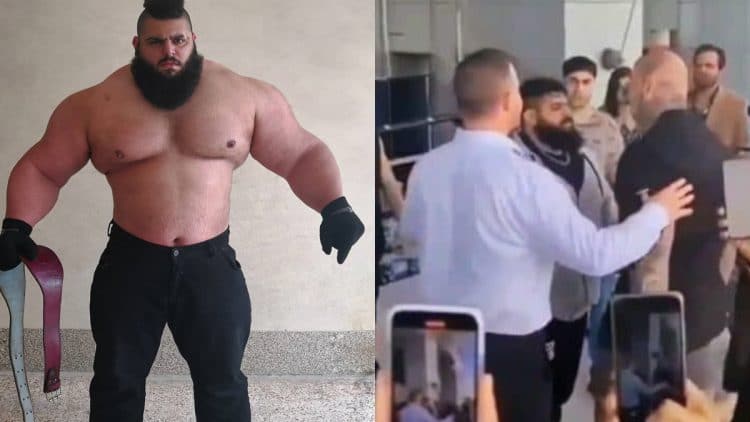 Last month, The Iranian Hulk and Ford had a face off in Dubai for their showdown expected to take place inside of a packed O2 Arena in London, England. After meeting face-to-face for the first time, Martyn towered over Gharibi. Initiating the violence, Gharibi attempted to take Ford down but was unsuccessful. After the two reset for another face off, it was Martyn who started things this time, shoving The Iranian Hulk to the floor.

Initially taking place on April 2, the highly anticipated boxing match was postponed until April 30 after injuries struck the card. Ahead of the showdown, hype around the contest continues to build as Gharibi and Ford shared glimpses of preparation for the fight. The Iranian Hulk posted clips of some unconventional training methods like taking full-blown punches to his body. However, it was the recent face off incident with Ford that left the Gharibi family ashamed of their son.

In a TV interview with Talk Sport, The Iranian Hulk discusses how the face-off incident has affected his relationship with his family.

“I cannot call my family; when I returned I didn’t go to my family. I can’t talk to my father and my mother, when I spoke to her, she said: ‘The person in this video that I saw was not my son, my son is way stronger than this’. Gharibi shared.

“It hurts my heart when I can’t talk to my family. I have lost my pride and I am destroyed. How can I explain?

“They deceived me and I fell to the ground. My family said that you will go there and finish him. They expected the other way around.

“How can I sleep or get any rest? I personally feel very bad and I cannot sleep but I am now taking sleeping pills.”

According to Gharibi, his mom denounced him as a son following the incident. The internet sensation known for his massive size and strength revealed that he is struggling to sleep and rest due to the stress caused by his family’s shame. To aid the ongoing problem, The Iranian Hulk mentioned that he is taking sleeping pills to help him at night.

Meanwhile, Martyn appears ready to fight and has forewarned Gharibi that he’s coming in weighing in the 320 lb ballpark. Ford has said he’s ‘making a beast from scratch’, and used the extra time caused by the postponement to refine his boxing skills. At this point, Martyn is unsure if The Iranian Hulk truly wants to fight him.

“I am asking the question if he genuinely wants to fight me? Because I don’t want to step in the ring and be perceived as a bully and seen as intimidating someone who hasn’t put the same work in as I have.

The main event clash will take place over four rounds, comprising 2-minutes each, and is sanctioned by the Professional Boxing Association.

In light of the recent statements by his family, Martyn questions The Iranian Hulk and his desire to compete in the boxing ring. Despite being disowned by his parents after the face off, Ford and Gharibi are expected to handle their business once and for all at the end of the month.