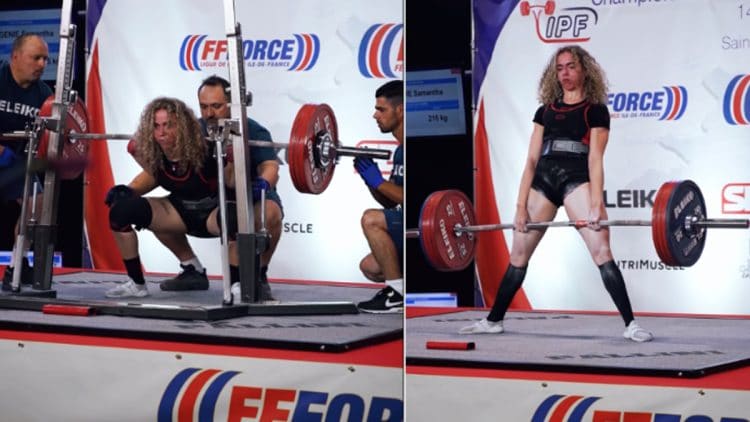 The 2022 FFForce French Junior Nationals took place in Saint-Germain-en-Laye, France, from May 14-16, 2022. Powerlifters from France are amongst the finest in the world, and their youngsters have proved that they are pretty darn good too. However, all eyes were pointed at Samantha Eugenie, who proved why she is one of the sport’s brightest young stars. Samantha won the raw 63-kilogram weight class with a stellar performance. She set all four new raw French Junior Records, as well as unofficially beating the current raw IPF Junior Deadlift World Record.

Samantha Eugenie started the competition in a fashionable manner, having squatted 182.5 kilograms (402.3 pounds). With this lift, Samantha broke her own U63KG French Junior Record by a massive 12.5 kilograms (27.5 pounds).

Samantha Eugenie carried her pacing onto the bench press, having broken another U63KG French Junior Record. She lifted 102.5 kilograms (226 pounds) to break the previous record by 2.5 kilograms (5.5 pounds), which was also held by her.

Following the first two events, it was clear what was coming up on the deadlifts, as it is Samantha’s greatest event. She pulled 215 kilograms (474 pounds) to officially claim the French Record, but also scores an Unofficial IPF Junior World Record. Bernardi Chiara currently holds the IPF Junior Record, having deadlifted 210 kilograms (463 pounds) at the 2021 IPF World Classic Powerlifting Championships.

Samantha Eugenie weighed in at 62.16 kilograms (137 pounds), and claimed new competition PRs in all events alongside winning the competition. This is her first time totaling half a ton, as her previous competition PR Total was 50 kilograms (110.2 pounds) lighter.

You can watch all of Samantha’s lifts here:

At only 19-years-old, the 2022 FFForce French Junior Nationals was Samantha Eugenie’s ninth sanctioned competition. She has won seven of them, most notably the:

Samantha holds three U63KG IPF World Records in the Sub-Juniors age division. She is now also the holder for all four U63KG French Junior records, so she has the potential to break the Open IPF World Records.

Samantha Eugenie is slowly but surely getting closer to Lya Bavoil and Tiffany Chapon. She is extremely competitive, so it won’t be surprising to see her battling with them for the title of France’s best powerlifter in a few years.