Thor pulled a 320-kilogram (705.4-pound) deadlift for 2 reps, showing that he still has the strength of a top strongman competitor. 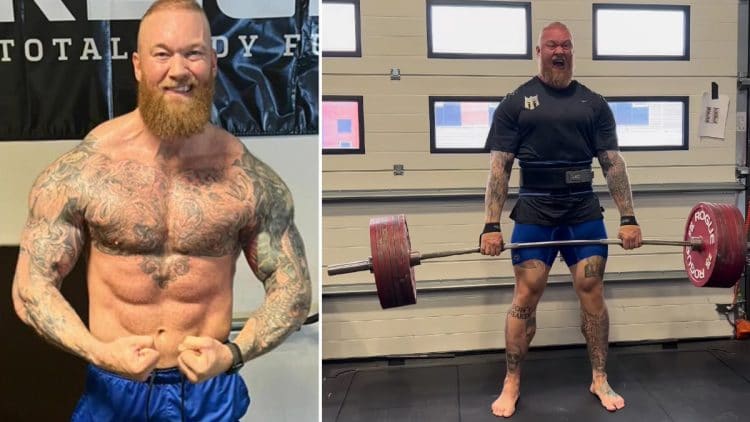 Hafthor Björnsson is one of the most decorated strength athletes in the world despite redirecting his focus to boxing as of late. In a recent Instagram video, Thor made quick work of a 320-kilogram (705.4-pound) deadlift for 2 reps, showing that he still has the strength that saw him claim the title of World’s Strongest Man.

Instead of pushing the limits in strongman, Hafthor has taken time to acclimate his body to the sport of boxing. His long-standing rivalry with Eddie Hall started back at the 2017 World’s Strongest Man (WSM) competition. Eddie Hall defeated Thor by a narrow margin to capture the title of 2017 WSM. Following the loss, Björnsson relayed that he was cheated out of the victory on that fateful day.

The contentious saga between the two strongmen continued after Thor broke Hall’s previous elephant bar deadlift world record. Marveled for his size and strength, Thor made history in 2020, pulling a gargantuan 501-kilogram (1,045-pound) deadlift, demolishing Eddie’s previously held record of 500-kilogram (1102-pound). Looking to settle their differences once and for all, Thor and Eddie met in the boxing ring.

Dubbed the ‘heaviest boxing match in history’, Thor and Eddie met in the middle of the ring and threw down. Hafthor utilized better boxing fundamentals and won the fight via unanimous decision. Before the marquee showdown, Eddie and Thor agreed that the loser would have to tattoo the winner’s name on their body. Eddie followed through with the bet and expressed desire for a rematch with the Icelandic star. While Thor’s efforts have been solely dedicated to boxing, he switched gears recently and showed that he still has elite-level strength.

In a recent video published on Instagram, Hafthor Björnsson shows off a deadlift of 320-kilogram (705.4-pound). “The Mountain” got in the zone after sniffing some smelling salts. During the lift, Björnsson used a lifting belt and wrist wraps.

After defeating Hall in the boxing ring, Thor laid out the conditions necessary for a possible rematch. Eddie and Thor both wagered $100,000 for charity pre-fight, which Eddie and Thor plan to pay. In addition, Eddie honored the tattoo bet and got ‘The World’s Strongest Man Hafthor Julius Björnsson’ inked on the bottom of his foot.

Many fans are wondering who Thor should face next. The highly anticipated fight between Iranian Hulk and Martyn Ford fell apart last month, and Martyn is looking for a new opponent. Ford has been preparing to make waves in the new sport but has yet to make his planned debut.

Regardless of who the potential opponent is, Björnsson, even slimmed down, possesses the same raw strength that saw him reach the top of a strongman. After deadlifting 320-kilogram (705.4-pound) for 2 reps, clearly, Thor can still give some of the world’s strongest athletes a run for their money.