Seven-time Mr. Olympia Phil Heath reflects on the mindset needed to achieve greatness: "Your consistency while dealing with life's curve balls will dictate just how bad you want it" 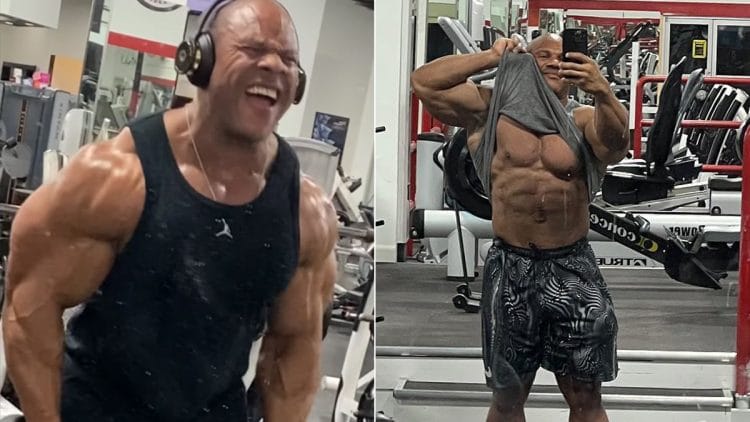 Bodybuilding royalty Phil Heath has reached incredible heights as an IFBB Pro, and still understands the ingredients necessary to achieve success. In a recent Instagram post, Phil showed off his impressive abs and offered a few words of wisdom to anyone struggling with life’s challenges.

During his reign atop the Men’s Open bodybuilding mountain, Phil Heath managed to claim victory at Mr. Olympia a total of seven times, matching the same number of Sandow trophies earned by legend Arnold Schwarzenegger. Phil was eventually dethroned by the late Shawn Rhoden in 2018 at Mr. Olympia. However, that didn’t stop Heath from competing, as he returned to 2020 Mr. Olympia and walked away in third place.

Phil never formally announced his retirement, and it remains uncertain if he will ever return to the stage. He struggled to get his physique back on track last year after contending with a serious bout of COVID-19. Phil lost a considerable amount of weight as a result of the illness but has steadily worked inside the gym to pack on mass.

Since taking a step back from competition, Phil has reflected on some of his accomplishments. He credits hard work and dedication as two factors essential to his success. Speculation about his return has grown after many fans were surprised to see how much Heath has improved his midsection. Nevertheless, Phil has made it a point to say his chance of returning to Olympia only stands at around 5%.

In a recent Instagram post, Phil Heath reflected on what it took to reach the top of the sport and shared a physique update.

“I’ve got goals and it is by no means just in my physique.

I’ve accomplished a ton in my sport, but what my next climb on this mountain of life is something which im gonna be most proud of!

The coolest thing is setting big challenges for yourself because you know it’ll be something which you’re putting forth maximum effort, intellect, sacrifice and perseverance. Your consistency while dealing with life’s curve balls will dictate just how bad you want it and that’s what separates the winners from the losers. Trust me I’ve been humbled many times from being out worked and what has made me want more is creating a more passionate “why”. This has enabled me to look deeper into my heart and figure out just how I’m going to navigate and respond versus react because responding takes more patience and understanding.

My life has definitely been filled with wins and losses, but those losses have produced more wins by learning from those moments of failing that I’m overjoyed with gratitude that God has provided me strength to keep pushing forward.

What’s going to push you through your darkest moment?

What type of language do you speak to yourself when no one is around?

Remember that finger pointing isn’t gonna do anything other than show you three more fingers pointing back at yourself.

I hope you’re providing yourself some hard questions and developing some real honest answers which will propel you toward personal greatness.

I know it’s not easy, but like an old coach once told me, “if it was easy Son, everybody would be champions!”

Have a great week!!!

Phil’s physique looks incredible, and it appears he stepped away from the sport at the right time. There have been an alarming number of bodybuilders passing away lately, including some high-caliber Pros.

Last year, Shawn Rhoden died due to heart issues and, Dallas “Big Country” McCarver also passed away from similar reasons. Making matters worse, George “Da Bull” Peterson died days before competing at the 2021 Olympia. More recently, the late Cedric McMillan died at 46 years of age, highlighting some of the growing concerns with the sport. The use of PEDs has become a hot topic, fueling discussions about whether or not they have a place in the IFBB Pro League.

Enjoying his time away from competitive bodybuilding, Phil is maintaining an impressive physique year-round. It doesn’t look like he will be returning to Mr. Olympia anytime soon, but Heath brought up his midsection anyways.