Shannon Sharpe shows off his insane bench press strength by crushing 365 pounds for reps, aims for 450 pounds by end of 2022. 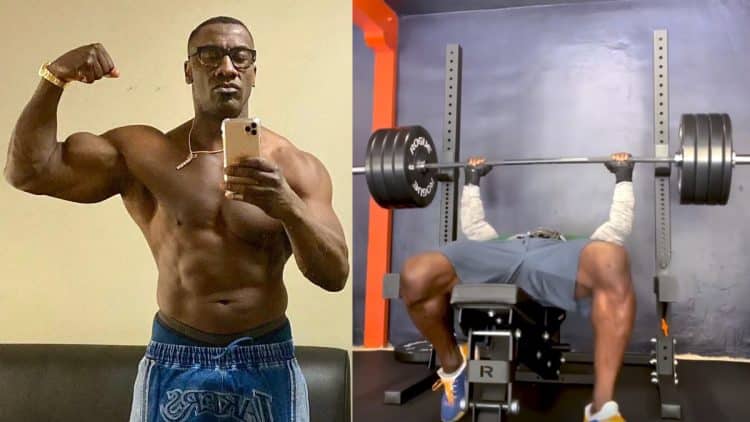 Despite his enthusiasm for the gym sessions, Shannon Sharpe continues to approach them as if he is chasing another Super Bowl championship. Sharpe has long moved on from his days of playing football on the field but he has not lost the athletic abilities he gained from it. In a recent video posted on his Instagram, Sharpe posted an impressive 365 lbs bench press for multiple reps.

After enjoying a successful career in the NFL, the three-time Super Bowl champion transitioned into the role of a commentator. He played for the Denver Broncos for 12 seasons, and for the Baltimore Ravens for two. By the time Sharpe decided to hang up the boots, he held the records for the most receiving touchdowns, receptions, and receiving yards.

He did not leave his training days behind as he continued to push his body’s limits. Although he is no longer playing, he still trains like an elite athlete. The NFL Hall of Famer has shown no signs of slowing down. For his latest birthday, Sharpe shared a physique update where he looked absolutely shredded. It’s incredible to see him carry the performance and discipline from his sporting days into retirement.

Sharpe maintains his immense stature through proper training and a diet regimen. A clip of the 54-year-old doing an unbelievably high rep bench press workout went viral on social media. Fans were left in disbelief after seeing his age-defying workout. He was not only doing high reps but also lifting relatively heavy weights.

In a recent video posted on his Instagram, Shannon Sharpe shared that he had improved his bench press of 365-pounds by two reps.

Sharpe can be seen performing the 365-pound bench for multiple reps in the clip. He revealed that he can now do two more reps than before after just three weeks. He’s targeting to hit a bench of 450-pounds by the end of the year. Considering how quickly he is improving in strength, it would not be a surprise if he manages to reach his goal.

Shannon Sharpe is clearly dedicated to maintaining his fitness levels even at the age of 54. He is still hungry to achieve new goals and push the boundaries of what he can do. Sharpe continues to inspire his followers with motivational posts, proving that age is just a number.

Sharpe’s experience as a professional football player has certainly given him an understanding of discipline and consistency.

One of the world’s greatest powerlifters, Russel Orhii, recently traveled to Seoul, South Korea to compete in the 2022 USAPL...