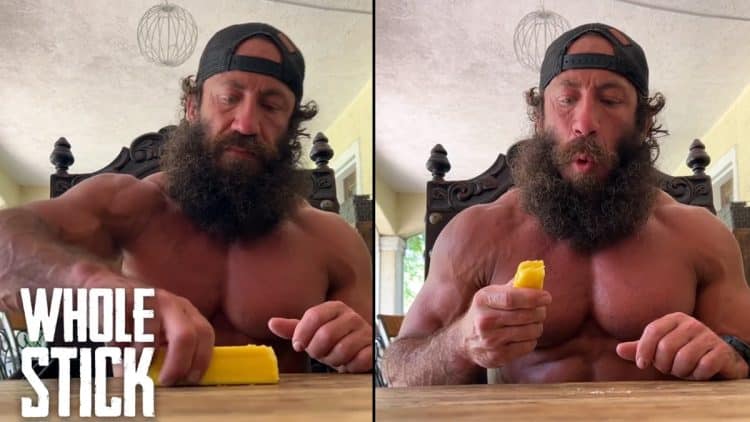 Brian Johnson, popularly known as Liver King, went viral for his unique approach to staying in shape. In a recent Instagram video, Liver King munched on a whole stick of butter and encouraged his followers to switch out the margarine in favor of butter.

Liver King believes in being true to our natural selves. The social media sensation promotes a natural lifestyle based on the nine ancestral tenets that he believes are the most important for achieving one’s best self. In his pursuit of living a life just like our ancestors did, Liver King refuses to be recognized by his real name, Brian Johnson. He stated that he has moved on from the person he was and no longer identifies with his younger self.

With over 1.6 million followers on Instagram, the 45-year-old boasts an insane physique in addition to his social media following. He has a significant amount of muscle mass with incredible leanness. Although he is not a professional bodybuilder, his conditioning is on par with other elite fitness influencers.

There are several videos of him consuming various cuts of raw meat, including bone marrow, liver, kidney, brain, testicles, and heart. His appearance on YouTube star Logan Paul’s Impaulsive podcast did rounds on the internet as he got Logan and the crew to devour on some of the ancestral goodies he enjoys.

For his latest lesson on ancestral living, he consumed different servings of butter before warning his audience about margarine, a butter spread substitute.

Liver King ‘Use Fat For Fuel’

In a recent post made to Instagram, Liver King eats a whole stick of butter in one go.

“It’s no secret that Liver King loves butter, and you should too.

It’s a helluva lot better for you than the alternatives. You’ve probably heard Liver King tear apart margarine because I hate the stuff.

It contains an insane amount of trans fats and seed oils, which promote unhealthy cholesterol markers and increase the risk of heart disease… and yet, so many of us are cooking with it daily.

Ditch the margarine. Pick up the grass-fed grass-finished butter.

If you’re putting in the work (which you should be)… lather generously. Use fat for fuel, dominate,” he wrote.

Liver King recommends throwing out margarine which is an alternative to butter but is higher in trans fats and seed oils. Along with his many other idiosyncrasies, he advises his followers to bring back some food items into their diet that have been criticized in recent years, like red meat for example.

He preaches a clean lifestyle devoid of chemical substances. However, he has received criticism from podcast host Joe Rogan and other users online about the authenticity of his claims. The CEO of the Ancestral Lifestyle later responded to Rogan with a different narrative and explained that he does not use steroids.

RELATED: Liver King Talks Ab Implants on Full Send Podcast: “They Are Like $10K Each. I’m Rocking $100K Worth”

Liver King stated that his wife and kids also follow the same lifestyle as him. After consuming a whole stick of butter on tape, Liver King suggests everyone eat nutrient-dense foods that don’t contain chemical substances.