The two elite competitors joined up for a beastly upper body workout session! 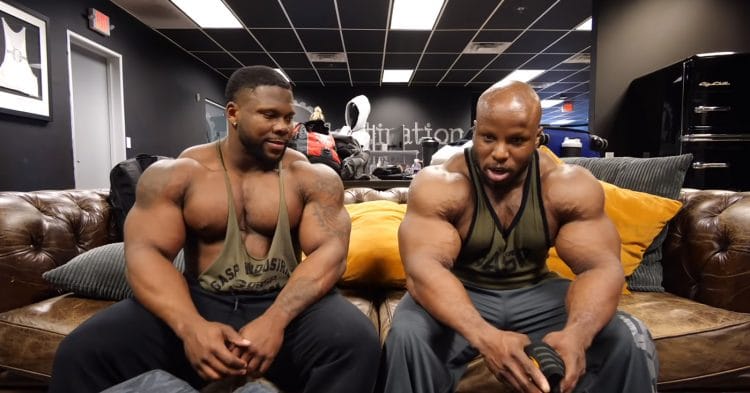 Shaun Clarida and Keone Pearson recently met up for a savage chest and shoulder workout where they pushed each other to the limit.

Clarida is coming off a 212 Olympia victory that many did not see coming while Pearson made his 212 debut last year, winning the Chicago Pro and qualifying for the Olympia but pulling out due to personal reasons.

The former isn’t taking any potential threats to his crown lightly though as he knows what, or rather who he’s up against, and that includes Pearson who is planning to compete against the champ at the 2021 Olympia in October.

“I’m going to give him a run for his money this year,” Pearson said at one point in the video.

Clarida jokingly responded with “I hope you got enough money bro“.

Related: Shaun Clarida Plans On Bulking To 230lb During The Offseason To ‘Dominate’ The 212 Division

But ultimately, they want to see each other succeed.

Pearson was super excited for what he said would be an epic workout with the champ and it was also their first time training together.

They both met up in Texas for a “crazy packed and epic week of team building and training”.

The description of the video read…

“Shaun and Keone are kicking off a great week and will be linking up with the likes of Branch Warren, Johnnie Jackson, Brett Wilkin Ben Chow, Ivana Wilkin, Olivia Gravengaard, Christina Heath, Joe Mackey to all shoot some timeless photos with the one and only Per Bernal. Stay tuned for more jam packed and LIT sessions with these ladies and gents.”

They started off with the incline dumbbell chest press working up to 300 lbs (150 on each side) for 8-10 rep sets.

Next was the machine flat press where they performed cluster sets. Clarida explained that for this exercise, they’d do 8-10 reps, rest 8-10 seconds, and then repeat this several more times to really get the blood flowing and keep constant tension on the muscles.

In between the training footage, Clarida talked about him being a very low-key individual which is rather obvious if you keep up with the sport.

“When I got into this sport 15 years ago, there was no social media. There was no Facebook, Instagram, we had Myspace and that was about it. I never got into this for the fame, for the glitz the glory. I got in it to be one of the best bodybuilders in the world.”

Well, he certainly achieved his lifelong goal because he is the best 212 division bodybuilder in the world.

After the machine press, they moved over to the cables to do standing flys before doing a few sets of chest-focused bodyweight dips.

For delts, they started with dumbbell lateral raises working up to 120 lbs (60 lb dumbbells) and it got intense in there but they pushed each other to work through the pain.

They finished off with the plate-loaded shoulder press and had nothing left in the tank after that.

Keone was right when he said it’d be an epic workout, and it was certainly motivating watching two of the best train together.

Watch the full workout below…