The upright row is one of the more controversial exercises. However, that doesn't mean that you can't still use it effectively to build your upper body. Learn how to do this exercise with tips, variations and more. 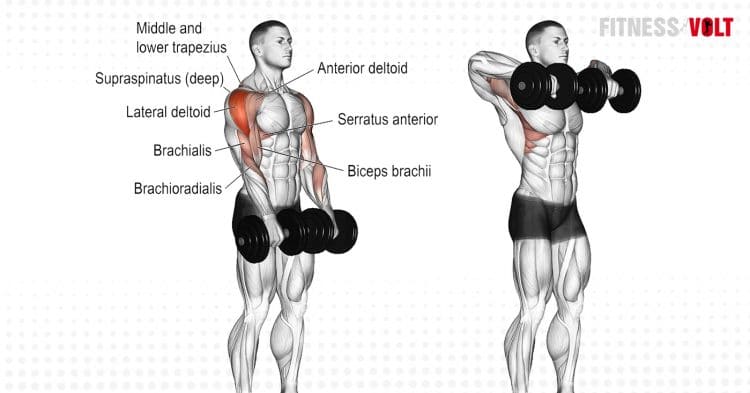 If there was ever an exercise that had so much negativity behind its reputation, it’d be the upright row. The reason being is that it does involve a degree of shoulder internal rotation and elevation of the arms simultaneously which is known to be a common cause of impingement issues.

Therefore, we recommend only those with more training experience include this exercise in their workout regime.

But it is a very effective shoulder and trapezius builder and in this guide, we’ll explain how to do it with some tips, variations, and how to include it in your training program.

What makes this exercise so effective is that it works several muscle groups and we’ve explained a little about each one involved below.

While upright rows are not meant as a biceps builder, there’s no way to avoid involving these upper arm muscles. Your biceps have two heads that contribute to elbow flexion movements such as curls and pulls.

An even stronger elbow flexor, the brachialis is anatomically different than the biceps in that it sits deep to the biceps and is found partially on the upper arm extending through the elbow joint. Brachialis isn’t visible on most people.

Yet we have another elbow flexor although stronger when the palms are rotated down, brachioradialis is part of the forearm’s anatomy. It’s can bend the forearm and supinate and pronate it as well.

The design of the human anatomy was a well thought out process… take the shoulder muscles for example. They have three separate heads that work together but function separately to do their own thing. The anterior or front shoulder muscles are responsible for movement of the arm at the frontside of the body such as moving the arm forward and up.

Then you have the lateral deltoid muscles that move the arm up and out laterally to the side of he body.

Not a commonly talked about muscle, serratus anterior is situated along the outer ribs between the pectoralis and latissimus dorsi muscles. It’s also called the “boxer’s muscle for a reason in that it supports and makes possible protraction of the scapula like when athletes throw a punch. It will also aid you in upward rotation of the shoulder bladed and elevating the arms above the head.

An original addition to the four rotator cuff muscles, teres minor is a muscle deep to the infraspinatus and deltoid that functionally externally rotates the shoulder joint and assists with adduction and extension of the shoulder.

The traps are a unique group of three muscles that are layered from the upper neck down the upper back. Upper fibers elevate the shoulder blades while the middle fibers pull it posteriorly and the lower fibers draw the scapula down and help the upper fibers to raise the blades.

How To Do The Dumbbell Upright Row

Doing this exercise without proper knowledge of how to do so is dangerous, especially if you do not have much training experience. Many would even suggest leaving this movement out, however, that doesn’t mean you have to.

Plus, using dumbbells allows you to do the exercise more safely because they allow you to move through a more natural motion or movement. And, we’re going to explain how to do it in a much safer way.

Here are step-by-step instructions for the dumbbell upright row.

Note: Use lighter dumbbells for this exercise.

Here’s a video example that we recommend taking the time to watch… (the exercise example is at 3:30).

The dumbbell upright row, when done correctly, can make your shoulders and traps grow like crazy. However, it’s not ideal or preferred by everyone. Plus, we also really like these variations/alternatives too.

While we recommend using dumbbells instead, many use a barbell for this exercise.

If you’re going to do it, use light weights, a wider than shoulder-width grip, and follow the exercise instructions above.

The face pull is one of the best exercises that you can do for the upper posterior muscles. But that’s not because it’s the best mass or strength builder, although it is effective for muscle and strength development.

It’s one of the best exercises for strengthening the postural muscles which is an often neglected aspect of training.

Plus, you don’t need weights to do it. In fact, you can use your own body weight or a resistance band.

The cable side shrug will work the same muscles and you can also use more weight. We really like this exercise as it may allow for a more pronounced contraction in the traps.

While we did explain how to do a movement closer to a high pull rather than how the dumbbell upright row is typically performed, we still wanted to include the “high pull”.

So rather than an upright row, a high pull is commonly and preferably performed by using a wider grip, leaning forward at the hips, and pulling the weights up and back.

High pulls are part of weightlifting movements and can be really beneficial for improving pulling strength and the muscles involved.

While we cannot tell you how to train, we do have some recommendations for the best ways to include the dumbbell upright row in your workouts.

First off, we suggest doing your main shoulder and traps exercises and saving this one for the end. Although, you do what you feel works best for you.

But because this is an exercise that we recommend doing with lighter weights for higher reps, in our opinion, the dumbbell upright row makes for a great finisher after your shoulders are sufficiently warmed up from your other exercises.

Plus, it’s best to handle your heavy weights first and not fatigue yourself with certain isolation movements such as this one. Although, we’re certainly not saying you cannot do isolation exercises first.

For most people, we recommend anywhere from 2-4 sets and 10-20 reps. But it really depends on your experience and goals.

Although, we think you shouldn’t train too light or heavy and so this is a good rep range to stick with.

The dumbbell upright row has had a not-so-great reputation in recent years because of how it’s typically performed. But the variation explained in this article is a lot safer and now you can do this movement and still make great gains while protecting your shoulders.

Use lighter dumbbells and incorporate this exercise after your main movements and also mix in some of the variations to maximize your efforts.

A variation of a hotly debated exercise, Smith Machine Upright Row are a pull-focused movement that works the traps, upper back,...