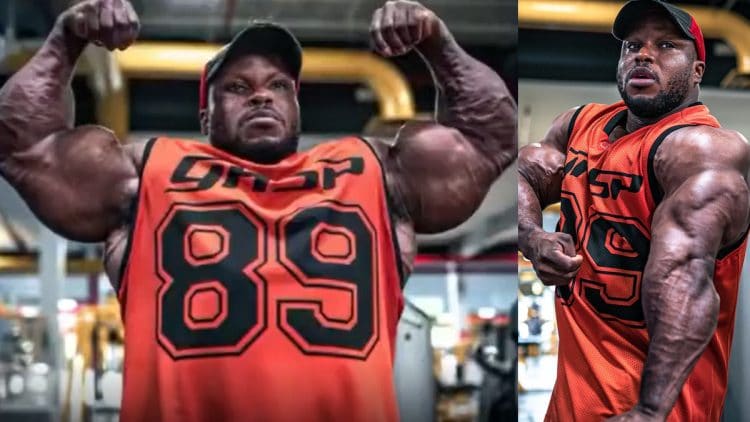 IFBB Pro bodybuilder Shaun Clarida recently shared an off-season arm day workout. Clarida has competed in the 212 division for the majority of his career and won the 2020 Olympia crown in that division. After finishing second at the 2021 Olympia, he transitioned to the Open Pro division and won the 2021 IFBB Legion Sports Fest Pro. New Jersey native made his first Olympia appearance in 2015, when Flex Lewis was a dominant force in the division and placed 16th. Clarida didn’t dishearted by the results, instead, he work hard to improve his physique and kept showing up at different competitions. The 39-year-old also known as “Giant Killer” is currently in the middle of his off-season training routine.

Recently, Shaun Clarida shared an off-season arms workout on his YouTube channel. Clarida explained that he normally does not have a dedicated arm day during the off-season. However, owing to fans’ requests, he chose to shoot an arm-day workout and present it to his 25 thousand-plus YouTube followers. So without any further delay, let’s delve into Shawn Clarida’s arm day workout.

Before starting with the next exercise, Shaun Clarida explained his approach to arm workouts to get maximum benefit. Clarida patterns the workout in such a way that every triceps movement is followed by a biceps movement. This enables the target muscle to sufficiently recover before the next movement.

“First thing I do is come in here and kill my triceps. I know that if I go to another triceps movement, I try to be still f*cked from the last set. So, instead of trying to go in and half-a*s it, I’d rather give it a break, hit biceps and by the time I come back to triceps again, they’re somewhat rested,” Shaun Clarida said.

Shaun Clarida started his arm day workout with standard rope push-downs. While explaining the reasons for starting this workout with this movement, Shaun Clarida said that rope push-downs warm the triceps and elbows up. The elbow joint comes into play for the overwhelming majority of arm workouts. Therefore, it is important to get them sufficiently warmed up before getting into the more complex compound movements.

“So the goal here is again… two feeders, two warm-ups, two to three working sets. I wanna try to fail at ten. So I’m going to keep working my way up as far as poundages go until I fail at ten. Then from there I’m gonna do one to two drop sets,” Shawn Clarida said.

After accomplishing the goal here, Shaun Clarida moved on to the next exercise.

Shaun Clarida treated the cable curls as another warm-up exercise before moving into more heavier stuff like preacher curls etc. The break-up of the sets was similar to that explained for rope push-downs as Clarida performed two warm-up sets, two feeder sets, and two to three working sets before closing with a drop set. However, Clarida switched things up a little after finishing the last working set.

Instead of performing a drop set, Shaun Clarida decided to go for a back-off set of cable curls with a single arm. A back-off set means that the person shaves off 20 to 30 percent of the weight he used for the last working set and tries to perform as many reps of the same movement as possible. Clarida was able to get in 12 reps with each arm before moving on to the next exercise.

Shaun Clarida performed a few working sets of triceps extensions and concluded the movement with ~60lbs dumbbells for ten reps. Clarida explained that he has been experiencing tendonitis in his elbow. As a result, he did not use extremely heavy dumbbells for this movement and only performed it with moderate weights.

Before starting with this movement, Shaun Clarida clarified that he prefers a camber bar over a straight bar. He explained that his wrists move in such a way that the straight bar does not feel comfortable to use.

“The camber bar gives me a little more flexibility and makes me able to put my wrists in a better position… Alright, I got f*d up wrists, okay?” Shaun Clarida joked.

Shaun Clarida performed the first set with 50lbs weight and slowly increased the load for the subsequent sets. He performed all the sets with a maximum range of motion. After the heaviest set of 10 reps with a 100lbs bar, Shaun Clarida shifted his focus back to triceps.

This particular movement emphasized on working the outer head of the triceps. Shaun Clarida attributed this technique to the late John Meadows. Meadows was popularly known as ‘Mountain Dog’ and Clarida said that the cable push-down with D-handles was one of Meadow’s special movement.

“We’re going to take D-handle here. We’re going to do an underhand grip trying to come down and open up and put a good traction on the triceps,” Shawn Clarida said.

Clarida performed a few working sets of this workout and then went on to perform one of his favorite exercises for the biceps.

“Let’s stick with the basics. The basics have always worked. You’ve got some great machines… I more so utilize that when I am in prep versus now. I feel like now my growth season for me personally… Compound movements that work the best for me. So barbell, dumbbell work… That’s what I like to rely on mostly during my growth season,” Shaun Clarida said.

Clarida worked his way up to 60lbs dumbbells in initial working sets and performed the final set with 70lbs dumbbells.

Shaun Clarida finished the triceps workout with overhead cable extensions. While explaining the reason for this being his finisher for the day, Clarida said:

“They really open the triceps head, get some of my blood in there and stretch the fibers… they’re full of blood nice and tight. I’m gonna go stretch them out and then get one more big contraction out of them.”

Shaun Clarida performed a few sets of this movement with full range of motion and with that, the triceps workout concluded.

Shaun Clarida finished the biceps workout on the only machine he uses during his off-season – the Flex Fitness Bisolator machine.

“It’s a very old piece. You don’t find it in many gyms. We’re lucky to have it here. If you want to simulate this movement and you don’t have this at your gym, it’s a simple incline with dumbbell curl. That’s what I’m doing here,” Shaun Clarida said.

Clarida will next compete at the 2022 Mr. Olympia which takes place from Dec. 16-18, 2022, in Las Vegas, NV. He hasn’t decided yet which division he will participate at the biggest stage, however, if he plans to take part in Men’s Open division it will be his debut at the Olympia stage. As per IFBB Pro rules, he will be allowed to compete in one division at a time.

The Last Guide for Bigger Calves You’ll Ever Need