Learn how to do this underrated bodyweight triceps movement that most people are missing from their arm workouts. 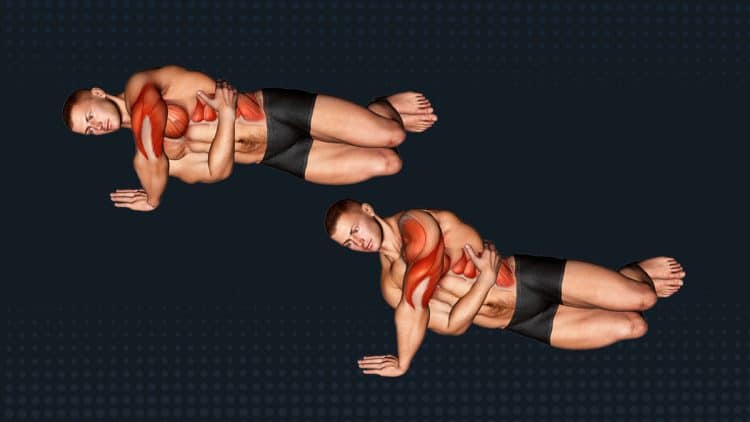 Side Push Up Guide

At first glance, the side push-up appears as a beginner or rehabbing exercise. But it’s not recommended for either. In fact, you need to have a good level of upper body pushing strength to do it. It’s a great bodyweight triceps and chest movement that can be done anywhere to challenge your upper body and create new muscle tissue. Mix up your arm workouts with an off-kilter exercise and train them from a different angle than what you’re used to.

Check out our complete side push-ups training guide for form tips, a list of benefits, variations, sets and reps, and more.

How To Do Side Push-Ups

Form and movement execution are key to doing side push-ups effectively. On one hand, you want them to be challenging and effective but you can’t be too strict otherwise you’ll struggle to do a few reps.

Push-up variations are a classic bodyweight chest and triceps exercise but what gives them an advantage over other movements?

You won’t find a type of exercise with more variations than push-ups and all involve the triceps and chest muscles. There are literally so many that we could list at least a hundred. Side push-ups are a good example of how you can change the positioning of your body to target the triceps brachii and there are several great options that will have the same effect.

At some point basic push-ups become too easy if you do them enough. To extend from the previous mentioned benefit, you’ll need to try some advanced variations to continue challenging your muscles because hypertrophy is a result of progressive overload overtime, or pushing your muscles to lift more or perform more repetitions.

Side push-ups are not just a gym class exercise. If you do them with proper technique they should be very challenging, especially for heavier individuals.

Unliteral means working one side at a time and when it comes to bodyweight exercises, using one arm is always harder than two. Of course, you’re only lifting a portion of your body weight when performing side push-ups like most push-up variations, but because the movement shifts the load onto the triceps rather than the chest and triceps, you’ll notice it’s not as easy as it looks.

A good example is going from a basic two arm push-up to a single-arm push-up. It instantly changes the movement from a beginner exercise to a more advanced one.

No weights or equipment needed

Your bodyweight is the only form of resistance which means you can lie down on any suitable surface and perform side push-ups.

With such an effective exercise, there’s always a drawback or two.

Some people might underestimate the side push-up because they can bust out 20 normal chest push-ups like nothing. But for this variation, the smaller triceps muscles (not chest) are the primary movers and if you do them with strict form they’re extremely challenging.

The word side push-up just sounds a little awkward (like who does a push-up on their side)? Well, it sort of is.

If you don’t have motion in your joints, then you may want to skip out on this exercise. Plus you’re turned to the side with your arm pressed against your body and trying to balance on one arm.

With that being said, we still really like this movement and after you get used to it there should be no issues.

Can place a lot of stress on the elbows

If you’re not careful, using too strict form can place a lot of stress on your elbow joints. Unlike weight training, you cannot adjust the resistance and this is dangerous because many strain to push themselves up and it’s fighting a lost battle.

Let’s talk about what not to do when performing side push-ups.

Being too strict – If you’re too strict with side push-up form you may not be able to do very many, if any at all. Trying to press your body up while lying on your side aint easy and if you don’t believe us try if for yourself! But that doesn’t mean to get sloppy. Still focus on using your triceps to push you up but allow your body to move with you.

Too little range of motion – You’ll see people barely bending their elbows when doing side push-ups. This goes against what we know is the best way to build strength and muscle mass. It will something but you’d be better off doing something else.

Too much range of motion – we don’t recommend using too large range of motion either as it can make the exercise impossibly difficult and you’ll strain your elbows. You don’t want to go all the way down during the negatives but rather, stay mid range.

It doesn’t get better than side push-ups for a bodyweight-only triceps building exercise. But whether you’re a beginner or more advanced, you may benefit more from these variations/alternatives.

Because side push-ups are a little more awkward there aren’t many options to add more resistance. Of course, there are two that can work which should be sufficient anyway. You can wear a weighted vest or have a training partner apply more resistance by pressing their weight into yours.

Not quite ready for side push-ups? try reverse dips, a two arm push-up variation that combines a conventional bodyweight chest press and a yoga pose. Like side push-ups, it shifts more emphasis onto the triceps muscles and they’re not an easy movement while being just as awkward but effective.

The one arm bench dip is a slightly easier exercise than side push-ups because while you shouldn’t cheat, your legs can assist during the movement if needed. Although if you’re a beginner, we do recommend that you get proficient at the two arm bench dip.

The explanation was that it’s harder to cheat and use momentum making triangle push-ups a more pure triceps-focused exercise.

Does that mean it’s better than the other exercises? Not necessarily as there are many factors involved in studies.

Single-arm push-ups are to the chest muscles what side push-ups are to the triceps. It’s the standard by which upper body pressing strength is measured, possibly second only to the handstand push-up. But if the classic two arm push-up is no longer a challenge for you beyond 25 reps then then it’s time to try the one-arm version.

Check out our complete guide to the single arm push-up.

As we always say, you can’t plan to much when it comes to bodyweight exercises unless you’re an experienced individual that knows their capabilities. That’s because your weight is unchangeable and remains the same. The only exceptions being if you’re more advanced and can benefit from adding a weighted vest or similar, or if an exercise has many variations that allow you to shift the weight loads through varying your body positions and angles (e.g., mechanical drop sets).

For an exercise to be beneficial, the general recommendation is typically 2 – 4 working sets (not including warm up sets). But it really depends on your overall routine and total training volume.

You should push yourself to get close to as many reps as possible. You don’t necessarily have to reach muscular failure but your sets shouldn’t be easy if you want to see results.

You’ll get a total upper body push workout with side push-ups. Below we’ve included brief explanations of the muscles involved in this exercise.

When you’re ready to do something more challenging for your triceps, don’t pass up side push-ups. They don’t require special equipment and are fast and easy to setup. You’ll work all three heads of your triceps muscles simultaneously in addition to your chest and front delts which makes it a complete push movement.

If you’re intermediate or advanced in your training then this is probably the variation for you if bigger and stronger triceps are what you’re after.

Use this guide to help you program this potent bodyweight push variation in your workouts.

How to Walk for Fitness and Fat Loss – Your Ultimate Guide