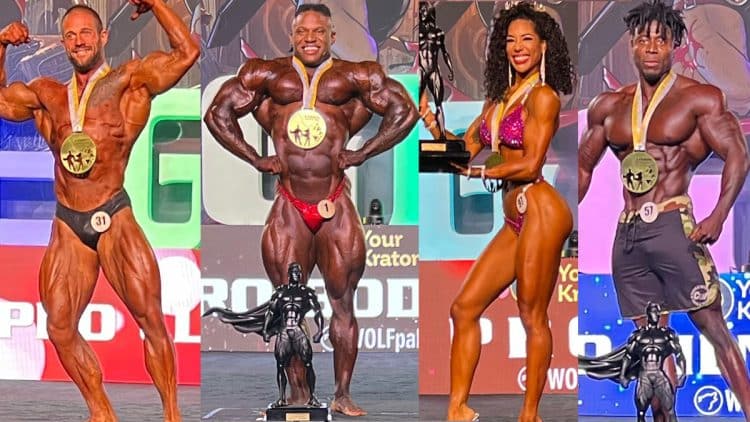 The 2022 Legion Sports Fest Pro went down this weekend (October 7-9, 2022) in Reno, Nevada, with seven bodybuilding divisions, featured including Classic Physique, Men’s Open, Men’s Physique, Bikini, Fitness, Women’s Physique, and Wellness. This show was one of the last Olympia qualifiers to take place in the United States.

This year’s bodybuilding season is well underway. Athletes have until November 20, 2022, to earn their respective invitation to 2022 Mr. Olympia, scheduled to take place from December 15 – 18 in Las Vegas, Nevada.
Last year, former 212 Olympia winner Shaun Clarida took home the 2021 Legion Sports Fest title. This year, he won’t be competing so a new champion will be crowned. Ahead of the showdown, a number of Men’s Open competitors have gotten the attention of fans.
The top three Men’s Open competitors from 2021 Olympia are automatically invited back to compete at the contest this year. Additionally, athletes can receive a qualification by accruing points throughout the season via the Olympia Qualification System. These points are earned by participating in tiered IFBB Pro League contests that offer points for top finishes.

Ahead of the contest, fans were keeping a close eye on Justin Rodriguez considering the active season he registered throughout this year. After taking some time away from shows, Rodriguez brought a balanced package and his lines and separation only seemed to improve following prejudging.

Meanwhile, Tonio Burton also attracted a lot of hype before the event given his fourth place showing at the 2021 Legion Sports Fest Pro last year. Following a heated battle, Tonio Burton proved himself with insane conditioning and fullness, winning the contest and punching his ticket to 2022 Mr. Olympia.

During prejudging, Bryant Carlton Smith stood out given his impressive upper body. Additionally, many fans expected Jeff Hallenbeck to do some damage after bringing one of his best packages to date. In the end, Jeff Hallenbeck won the contest and earned his invite to Olympia.

Ahead of the show, most of the bodybuilding community expected Kyron Holden to walk away with the win. He competed at four IFBB Pro League shows last year and won them all except 2021 Mr. Olympia.

Holden was tasked with facing a number of threats but most notably, Wilfred Harris. Harris brought one of his career’s best looks, which was highlighted by his impressive biceps and triceps. The finals were intense, but ultimately Kyron Holden got the job done and won the title.

Bikini is one of the most competitive divisions in the sport and this contest was no exception. Lawana Dunbar’s aesthetics and narrow waistline saw her emerge as a frontrunner. And while most of the signs pointed to her winning the contest, Jourdanne Lee pulled off the victory and stamped her ticket to 2022 Mr. Olympia.

Fitness is steadily becoming one of the most competitive divisions in the IFBB Pro League. Anna Chism brought a conditioned physique that many thought would be enough to win. After a tough battle, Danielle Chikeles narrowly defeated her and won the Legion Sports Fest Pro title.

This weekend’s Women’s Physique division put on a show. Several competitors stood out during prejudging, which made the judges’ jobs even more difficult. Sara Bradley impressed fans quickly with her routine and eloquent posing skills. However, Evon Pennington‘s package was undeniable — and the judge’s scorecards reflected that after she won the contest.

Fans were clamoring for the Wellness results in Reno this weekend. Prejudging saw two bodybuilders emerge as legitimate contenders for the Legion Sports Fest titles, which were Judian Winston and Amanda Burnett. They showcased top-tier physiques, but Amanda Burnett pulled ahead in the finals and is now 2022 Olympia bound.

Fitness Volt congratulates the winners this weekend and look forward to seeing them perform on the 2022 Olympia stage!