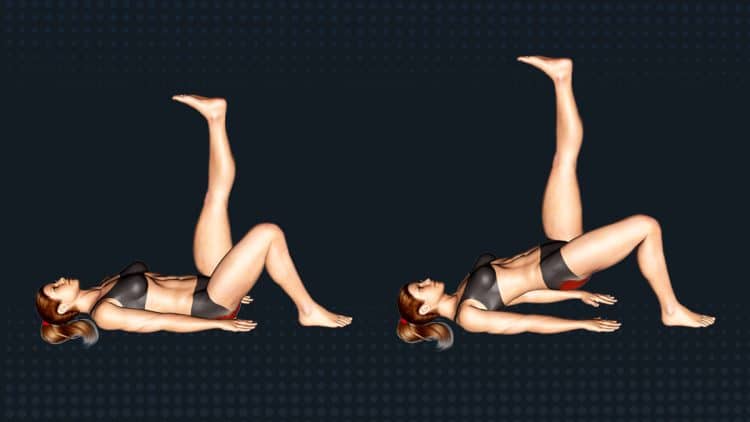 The single leg hip bridge (straight leg) is an advanced variation of the basic hip or glute bridge exercise. It’s a long lever based (vertical leg) bodyweight movement that combines a unilateral element and the weight of your working leg to challenge the core and lower body muscles. You also need decent hip and knee flexibility to maintain the extended leg at a 90-degree angle.

Place this variation in your glute rotation with our detailed exercise guide on single leg hip bridges.

How To Do Single Leg Hip Bridges (straight leg)

In this section, we’ll go over proper single leg hip bridge (straight leg) form and exercise execution, breaking the technique down with step-by-step instructions. Note: Before you attempt this exercise, we recommend performing a few minutes of mobility work to warmup the joints and muscles.

Why would you want to incorporate single leg hip bridges in your workouts?

Strengthen your glutes and posterior

Your butt muscles are more than just for show. They play an important functional role in movement of the lower body. However, sitting on our tooshies all day and not training them much is a recipe for weak buns that affect function and range of motion in other muscle groups and surrounding joints.

Hip bridges also fire up the posterior chain muscles as a whole from the back down to your calf muscles. The backside muscles tend to get less attention probably because we don’t see them. But they’re just as important.

Everything from weight training to physical activities and bending down to tie your shoe laces requires healthy and functional hips. As we get older, bones start to lose their density and hence increase the risk of injury. Strength training has shown to not just strengthen muscles but decelerate bone loss as well.

Progression is a necessary procedure when it comes to getting better at anything. Not everyone is ready to jump straight into weighted hip thrusts and that’s why bodyweight bridges have an important place. You’ll learn how to use your muscles together for efficient movement of the hips and lower body.

The when you have bodyweight hip bridges down pat you can introduce a loaded barbell to maximize your lower posterior chain development.

What are the potential cons of single leg hip bridges (straight leg)?

While you could do the bent-knee variation of this exercise, if you don’t have decent flexibility in your hips and knees, the straight leg version is out of the question.

Bodyweight exercises eventually lose their effectiveness if you do them enough. After about 25 reps or so, you’re no longer challenging the muscles and as a result, they cannot adapt, get stronger or increase in size. However, for single leg hip bridges, there are several advanced variations that will allow you to keep progressing.

If you want to make single leg glute bridges work for you, avoid these common form mistakes.

Arching your lower back – Oftentimes weak hip flexors will cause an arched lower back while in the lying position. This is the first thing you need to fix when setting up for single leg hip bridges. Remember to roll your pelvis under until there’s no space between your trunk and the floor.

Allowing your hips to shift – A lack of core strength and stability can cause the hips to shift in the left or right direction. If this is you, revert back to the double leg hip bridge and work on this area of fitness before attempting the single leg variation.

Not activating the core and glutes – Total body stability and glute engagement are key to this movement. Make sure to keep your core tense and squeeze those cheeks until you’ve completed your set.

The single leg hip bridge serves a special purpose but you should also consider these other variations that come with their own advantages.

An ideal beginner progression, the basic hip bridge works all of the same muscles, although to a lesser degree and you’re fully balanced on both legs, taking out a lot of the stability requirements. Note: Placed a fixed barbell on your hips for added resistance. It’s a good progression to conventional weighted hip thrusts.

If you cannot keep your leg vertical and extended, start out with the bent-knee version which is much easier. Then, try to gradually straighten out your leg each week until you can keep the leg vertical at 90 degrees.

Train your hips and glutes through a deeper range of motion by propping up your upper body on a bench or object of a similar height as you would a weighted hip thrust. You don’t need to use weight but if you want to but aren’t ready to use a barbell or don’t have access to one, it’s also much easier to hold a pair of dumbbells at your hips compared to the floor variation.

A simple way to make this exercise harder and get more range of motion is to elevate your feet up onto a raised platform like a bench, chair or something similar.

Here’s an alternative to the barbell hip thrust highly recommended by “The Glute Guy” Bret Contreras. Wrap a band around your hips and secure the other end to a dedicated hip thruster bench, power rack or a setup that will work for this exercise.

You can start out with a light resistance band, but Contreras suggests progressing to thicker bands that will keep you in a target range of 3 sets x 20 reps for the band variation.

Watch the video example below.

One of the simplest (although not easiest) ways to add more resistance to a bodyweight straight leg hip bridge done on the floor is to wrap a resistance band over the sole of your extended foot and anchor the other end down using your arms.

The king of hip bridge variations, barbell or weighted hip thrusts are, in our opinion, the epitome of butt-building greatness. Different from any other lower body movement, the bar sits on the hips rather than the trapezius muscles or the floor.

Variations involve a similar setup and movement pattern to single leg hip bridges. These variations are entirely different movements but they work all the same muscle groups. And actually, you may prefer them over glute bridges and hip thrusts.

When it comes to posterior chain exercises, the Romanian deadlift (RDL) stands above the rest. It’s not as taxing on the body compared to conventional deadlifts, and consequently tends to be a preferred exercise. RDLs use a shorter range of motion stopping the bar mid-shin before.

Single leg glute bridges are a fantastic exercise but lunge variations are more versatile and likely just as effective. It’s also easier to tack on more weight to lunge movements because you can use heavy dumbbells.

It’s like a lunge on steroids… Bulgarian split squats are, in our opinion, a superior mass and strength building exercise because it more resembles a upright single leg squat, whereas lunges occur in a forward and backward movement. They’re also always lower impact, especially if you perform lunges by lifting and planting your feet.

There are also a few variations of Bulgarians including the forward leaning version which we really like because it involves more hip hinge to activate more of the posterior chain overall.

If you’re considering programming single leg hip bridges then you’re most likely a beginner exerciser or need a bodyweight variation to supplement weight and machines leg workouts. It can be an excellent addition to your training and a progression to more advanced exercise variations.

Hip bridges are a great warmup exercise for the joints and muscles before a leg training session. They’ll also activate the core muscles and help to pre-educate the hips to reinforce good lower body lifting mechanics.

Cool down and fatigue your glutes at the same time after a leg workout with a couple sets of single leg hip bridges.

If you practice yoga techniques then single leg glute bridges (straight leg) are the perfect fit along with other awesome exercises like rolling bridges that stretch, massage and length the back and neck.

Your level of training experience typically determines the “optimal” number of sets and reps. However, because single leg hip bridges (straight leg) are typically a beginner bodyweight-only exercise, you’ll likely get the most benefit from higher volume training. If the exercise is too easy, you won’t do much.

Not to mention, research has show that higher reps taken to failure can be just as effective for muscle growth as higher weights and fewer reps.

Single leg hip bridges work all of the posterior chain muscles from your neck all the down your feet. Although, it primarily targets the lower body, core and back muscles. Learn about the anatomy of muscles involved in this bodyweight movement.

Being a bodyweight based exercise, hip bridges are better when you can make them more challenging. The hip bridge (straight leg) improves upon the basic glute bridge by requiring more flexibility and strength requirements, making it a healthy butt building movement.

We hope this guide will prepare and challenge you to include a popular weight-free exercise in your leg workouts and to take advantage of the more advanced variations to advance your progress.