Life and accomplishments of Stan Efferding 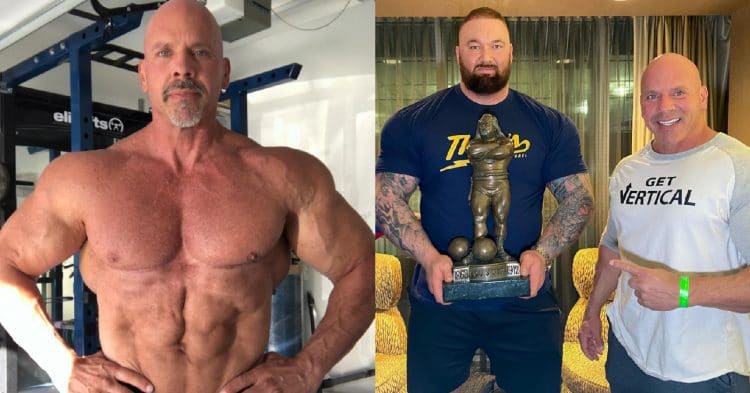 Stan Efferding is an IFBB professional bodybuilder and powerlifter from the United States. He once held the all-time raw powerlifting world record in the total (2,226.6 lbs) and squat (854 lbs) without knee wraps, while competing in the 275-lb class. He has been referred to as “World’s strongest bodybuilder,” and “The White Rhino”.  This is his complete profile, biography, training regimen, diet plan, and more.

He excelled at soccer in his younger years and was offered a scholarship to play in college, but instead opted to attend the University of Oregon, where he studied Exercise Science.

In college, Efferding trained to build his strength and continued to gain more and more knowledge before deciding that he wanted to pursue a career in strength sports, eventually competing in powerlifting before getting involved with bodybuilding.

Throughout his powerlifting career, Efferding was known to have an impressive physique, which is less common in the sport as the goal is to gain as much size as quickly as possible. While he’s the world’s strongest bodybuilder without a doubt, Efferding is also one of the smartest bodybuilders to ever compete.

Related: These Are The 12 Strongest Bodybuilders Of All Time

In his first year of competing in powerlifting, Efferding deadlifted 782 pounds raw and totaled over 2,000 pounds at the Pepsi Region 8 challenge.

Then in the following year (1997), he took a break from competition in both sports of which he focused on business endeavors.

In 2009, Efferding set two American records (Open category) at age 41 when he totaled 2,070 lbs at the APA “All RAW” Northwest Regional Championships in the non-drug-tested category.

At the Southern Powerlifting Federation (SPF) POWER “Stimulus Package” Raw Meet in Sacramento, California in 2009, Efferding came close (within 38 pounds) to the all-time raw total world record set by Jon Cole in 1972, with 2,221.2 lbs in the 275lb category. In that meet, he bench pressed over 600 lbs and earned a spot in the raw unequipped bench press Hall of Fame.

In 2011, Efferding eclipsed Konstantin Konstantinovs’ all-time record with an 854 lb squat and a three lift total of 2,226.6 lbs at the SPF California State Championships.

Efferding learned a lot about training to build muscle from bodybuilding legend Flex Wheeler and applies much of that knowledge to his training. With that being said, he trains a bit differently for bodybuilding compared to powerlifting.

For example, he doesn’t believe the barbell bench press is the best exercise for hypertrophy. His explanation was that as a powerlifter, you’re not getting as much range of motion and the hands being positioned closer to the body involves a lot of shoulders.

When training to grow bigger chest muscles, the focus should be on keeping tension on the muscle and contracting the chest. Reps should be very controlled with a good stretch and reps should be taken to near failure for maximum stimulation. In between sets, Efferding believes it’s important to stretch the chest muscles to recruit maximum muscle fibers. He also likes training each muscle twice per week for hypertrophy.

Rest periods in between sets should be 90 seconds and two minutes at the most.

Efferding shared a quads workout that he learned from Wheeler and according to him, it’s the most effective routine he has used for hypertrophy. And it doesn’t involve squats or deadlifts which is surprising. But again, the goal is hypertrophy, not massive strength.

Efferding likes to start with leg extension to warm up the knees before the heavy lifts. But this also allows you to develop a better mind/muscle connection with the target muscle so that you can maximally engage it during the heavy compound exercises. He also mentioned that doing pre-exhaust sets such as with the leg extension can decrease overall training recovery.

In between sets of the leg press which was the next exercise, Efferding was taught by Wheeler to squat down and hold it for about 20 seconds. This stretches the legs and Efferding explained how research shows that stretching in between sets may have a hypertrophic effect in the legs.

Ending with walking lunges stretches the quads further and this ends the workout.

Stan Efferding founded the “The Vertical Diet,” a performance-based nutrition program, which was a big hit. It’s essentially a culmination of everything he learned about nutrition during both his bodybuilding and powerlifting career.

The plan focuses on fixing the common nutrition mistakes that competitors make, resulting in compromised health and performance due to a lack of proper and adequate nutrient intake.

He believes red meats, whole eggs, dairy, fruits, salt, and iodine are very important for maintaining health while performing at a high level because these food contain essential micronutrients.

He has also stated that consistency, meal prep, watching calories, and weighing yourself is more important than the type of diet, of which he refers to scientific studies to back up his information. “What’s the best diet? The one that works.”

“The number one predictor of success is compliance“

Efferding also thinks creatine supplementation is a waste of time and believes sodium is the most effective performance enhancer for athletes. Why? It increases blood volume which delivers more oxygen and nutrient to cells, that repairs and removes waste. It also increases stamina and endurance and allows athletes to hold more water in the muscles, therefore improving strength and explosiveness. Sodium also supports joint integrity.

Quick breakfast for people on the go

Efferding’s go-to meal in the morning is some rice, an egg, and about 4 ounces of orange juice. He recommends this for anyone who needs a quick meal before they head out the door and it’s a great option before training.

Stan Efferding will go down as one of the strongest bodybuilders of all time, and he has achieved so much during the span of his career. But he is also one of the greatest educators that we have today when it comes to proper nutrition, training, and health. From world record-holding powerlifter to entrepreneur and a go-to source for many, Efferding is just as big of an inspiration to millions around the world.

Three Common Interval Training Mistakes You Might be Making