Stan Efferding's strength levels are not dwindling regardless of the time. 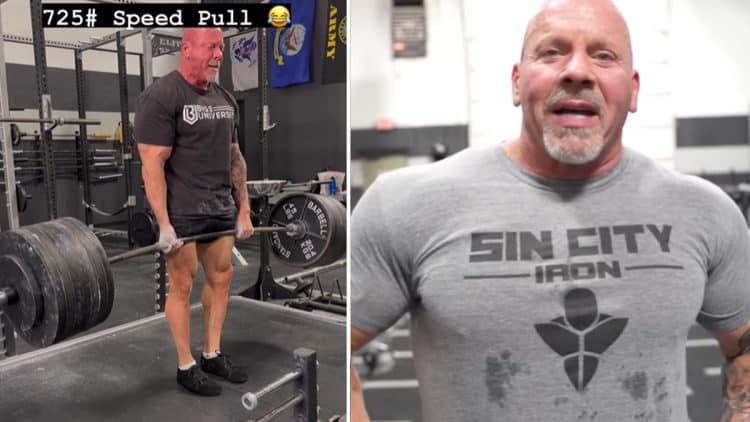 In addition to being a bodybuilder and powerlifter, Stan Efferding became an internet sensation due to his extensive knowledge about training, diet, and living a healthy lifestyle. Stan has become quite skilled at sharing tips and advice on Instagram, which he has learned from the hard way over time. This ultimately earned him a massive following, which is close to half a million on Instagram. Stan, however, is experiencing incredible results by practicing and living the things he preaches. Recently, he uploaded a video of himself deadlifting a whopping 725 pounds (328.9 kilograms).

Although Stan Efferding has a much heavier lifetime PR to brag about, this 725-pound (328.9-kilogram) is notable because of his age. Stan Efferding will turn 55-years-old in just over a month from now, but it does not seem like his body is aware of that. He is still carrying around a massive physique, which leaves many people envious. In addition, his strength levels are through the roof, as is visible from his recent deadlift.

Stan Efferding described his 725-pound (328.9-kilogram) deadlift as a “speed pull”, and to be fair to him, it did seem quite easy relative to the massive weight. He also did not use any equipment apart from some chalk for his grip. Stan grabbed the bar with a mixed grip and a very narrow conventional stance. He recently got back to deadlifting this way, as the narrow stance and feet facing forward allow him to activate his muscles in a greater sense.

Stan Efferding At A Glance

Stan Efferding excelled at both sports, but his powerlifting All-Time World Records are his most notable accomplishments. In regard to powerlifting, he took part in 15 sanctioned competitions and claimed 13 victories.

Stan Efferding’s powerlifting career also overlapped with bodybuilding. In other words, he managed to succeed in both sports simultaneously. Although he originally started bodybuilding in 1991, Stan found success upon his return to the sport in 2008, having won the NPC Emerald Cup. However, he would accomplish the dream only one year after, since Stan became an IFBB Pro through his victory in the 2009 NPC Masters, Teen & Collegiate National Championship.

In Stan Efferding’s opinion, lifting weights is the fountain of youth, which is a definitely believable statement coming from someone who had an absolute passion for it. Nevertheless, he remains a strong advocate for a healthy lifestyle, especially in regard to lowering high blood pressure. Stan is now using his years of experience to spread the word, but also work on himself. The deadlift has been his focus for the past few months, and it is clearly paying off. So, maybe Stan can build up to an 800-pound deadlift as well.