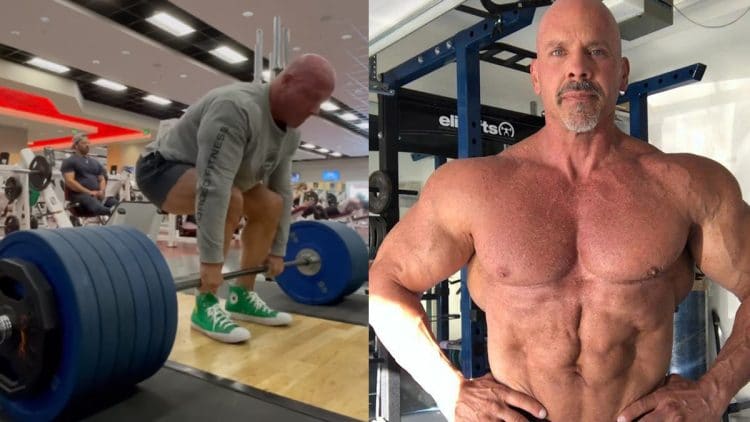 IFBB Pro bodybuilder and powerlifter Stan Efferding recently cranked out a massive 288kg (635lbs) raw deadlift double with hook grip in the gym. Efferding is the 2010 Mr. Olympia World’s Strongest Bodybuilder contest winner. He is referred to as the ‘world’s strongest bodybuilder’ and has gained a worldwide following for his vertical diet and training method.

Stan Efferding recently joined entrepreneur Aaron Williamson at the Sin City Iron gym for a leg workout. Following this, Efferding attempted and executed the 288kg (635lbs) raw deadlift double on a stiff bar in the gym without using any equipment. The 54-year-old proudly mentioned using ‘no belt, no socks, no underwear, 70 degrees, no wind assist’ in a conventional stance to achieve the massive feat. Courtesy of Stan Efferding’s personal Instagram account, you can watch the full video here:

“635×2 Hook grip, stiff bar, no belt, no socks, no underwear, 70 degrees, no wind assist, after training legs with @aaronvwilliamson at @sincityirongym this morning.
.
It’s important to put in as many qualifiers as possible because if I was fresh and had a belt and straps and an okie bar I probably would have gotten …. wait for it …. 635×2 😂 🤷‍♂️,” Stan Efferding wrote in the caption to his post.

Stan Efferding is an American IFBB Pro bodybuilder and professional powerlifter. He started competitive bodybuilding in 1988 and won the IFBB Pro card with a win at the 2009 NPC Masters, Teen & Collegiate National Championship in the super heavyweight division and Overall. According to Wikipedia, Efferding competed in a total of five professional bodybuilding competitions. Winning the 2010 Mr. Olympia World’s Strongest Bodybuilder is the biggest competitive achievement of his bodybuilding career.

An Anesthetic physique is not really a prerequisite for the sport of powerlifting. However, Efferding was always praised for his physique during his days as a powerlifter. He held the all-time raw powerlifting world record in the total (1009.9kg/2,226.6 lbs) and squat (387.3kg/854 lbs) without knee wraps, while competing in the 275lbs weight class.

In recent years, Stan Efferding has formulated a nutritional framework called the vertical diet. It serves as a ‘simple, sensible and sustainable’ solution for people with high caloric requirements. He co-authored the book ‘The Vertical Diet’ with Damon McCune to explain the concept better. Efferding himself is a follower of this diet. Therefore, looking at his recent achievement in the gym, it sure seems to be an effective method to follow.