Looking for redemption in 2022, bodybuilder Hassan Mostafa is maintaining muscle mass while switching his diet and training around for Ramadan. 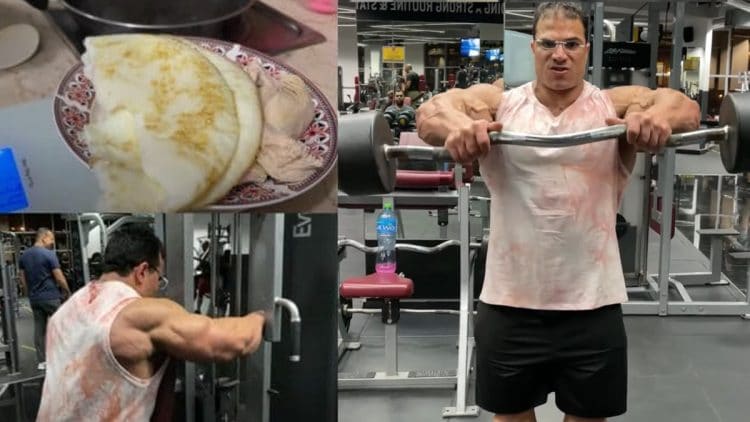 Despite an unfavorable season in bodybuilding last year, Hassan Mostafa is determined to right the ship and get his career back on track. In a recent video on YouTube, Mostafa shares how he will be tinkering with his training and diet to accommodate his physique during Ramadan.

Emerging as a preeminent threat in 2020, Mostafa managed to place fourth at the New York Pro. Following his performance on the East Coast, he was sidelined from competition after an infection prevented him from training at one hundred percent. After only competing at one show in 2020, Hassan made up for lost time and competed at a total of seven IFBB Pro shows last year in 2021. While he didn’t walk away with any major titles, some of his most notable performances came when he placed ninth at the 2021 Arnold Classic and then thirteenth at the 2021 Mr. Olympia.

Ramadan, observed by Muslim populations, is the ninth month of the Islamic Calendar. Those who are able-bodied and healthy, practice fasting while the sun is up, in addition to focusing on prayer and reflection throughout the month. As a bodybuilder, the dietary restrictions imposed by Ramadan can make it difficult to maintain a competitive physique, though Mostafa is confident he’s found the recipe for success.

Hassan Mostafa on Ramadan Diet: “I Eat The Same Macros”

In a recent video published on YouTube, Mostafa explains the changes he’s made to his diet and training to ensure he doesn’t lose or gain too much weight during Ramadan.

“Today I will film a day in my life in Ramadan. Usually in Ramadan, I wake up around noon and sleep after sunrise. Right now, I’m in prep so I switched my day around so I can manage to eat all my meals and train. This way I can manage to follow my plan accordingly and continue with my diet and training as per usual.” Hassan Mostafa said.

Hassan mentions that he starts the day with cardio to break his fast.

“And now I finished 45 minutes of cardio. I will now go eat my first meal of the day. All done with cardio. I had a sip of water to break my fast just now. I filmed this before I drank it but unfortunately the camera stopped recording. The first glass is apple cider vinegar with lemon and peppermint oil. Second glass is a greens drink and this glass is for gut health and digestion. This is good for improving colon health. I have digestion and bloating issues so this helps minimize it and helps with my gut health overall.

Now I weigh my first meal. 150 grams of rice and 5 oz of chicken breast. It’s supposed to be turkey breast but I can’t find it here in Kuwait. I usually prep my food for 2 or more days. This way it’s ready to eat right away especially if I have work or I’m in a rush. But if I’m free or have more time I’ll cook my meals one by one so it’s more fresh. Personally, I can eat food that’s been in the fridge for a couple days no problem so see how you feel and what works best for you. This is one cup of egg whites, add some salt. I’ll warm it up and then go eat.”

Following his first meal of the day, Hassan tops it off with one cup of egg whites, with added salt. According to Mostafa, he’s eating the same macros as he was last month. He modifies his meals so that he can still eat with his family.

“My day in Ramadan is the same as it was before this month. I eat the same macros, same meals and even same cardio timing, before meal 1 as it was previously as well. Cardio before breaking fast is the best because it’ll help burn more fat and increase appetite. Because I’m in prep for a show, my meals are exactly the same as they were before but this is a lifestyle where you’re trying to eat healthy or tracking calories or want to follow a diet for only 50% or only 75% of time, then you can eat after with the family no problem.

For example, if they’re having rice and meat, you can weigh out your typical meal, let’s say 200 g rice and 200 g of protein, whatever it is. Then the rest of your meals can be totally clean. So if you just have a personal goal and want to be healthy, you can eat 4 out of 5 meals clean this way you’re mostly on track. Hassan said. But if someone has a show coming up soon then you have to follow your regular routine 100%, all that’s changed is eating at night instead of the day, that’s all.”

While some might lose weight or gain weight during Ramadan, Hassan believes consuming the same number of calories throughout the night will result in weight remaining steady.

“Some might say they’ll lose a lot of weight during Ramadan, yes that could happen. But if you consume the same number of calories throughout the night and staying on track I don’t think you’ll lose much weight, if any at all. Many people gain weight in Ramadan because they don’t control the amount of calories they consume. Between all the sugary drinks, and endless sweets. Hassan continued. So people end Ramadan with added weight instead of taking advantage of the 16 hour fast. The weight goes up because they take in way more calories than their body needs during the eating period, yet some people get shocked by this. So, take advantage of this month. The worst part is all the sugary drinks and calorie-dense desserts. They cause weight gain and at the same time don’t fill you up as necessary so be careful with that.”

Hassan prefers to eat veggies after training as they slow his digestion down.

“Personally, if I eat veggies before training it slows down my digestion, so I hold off on veggies until after training. Especially that time is tight between meals. But after training, I can eat veggies so I consume some fiber that will help with my digestion. 5 oz fish. I cook all my meals without salt so I can add it later on and track the proper amount. I’m surprised when I hear some people don’t use salt on their food. Hassan said. You can reduce salt if you have heatlh problems, but salt is very beneficial and will give you a good pump in training.”

After breaking his fast with cardio, Mostafa runs through a series of workouts.

Following his training, Mostafa winds down with his Meal 4 during Suhur (early morning before sunrise).

“I just got home. This is meal 4. 150 g rice and 5 oz fish. Time to watch my show and enjoy my night. Now it’s time for Suhur, 6 oz beef with cucumber. Some people might find things difficult. For me, I switched my day and night so I can stay on track. However, some people have to wake up early ang go to work so they can’t do that.” Mostafa said.

Despite the time restraints, Mostafa is maintaining a massive physique in the off-season. Since entering the IFBB Pro scene, many believe that he will be incredibly hard to defeat once his conditioning catches up to his sheer size. Hassan has made it clear that his intentions are to compete at the upcoming Orlando Pro in July. At the end of last month, Hassan showed some of the improvements he’s been making and plans to bring a package that can’t be denied.