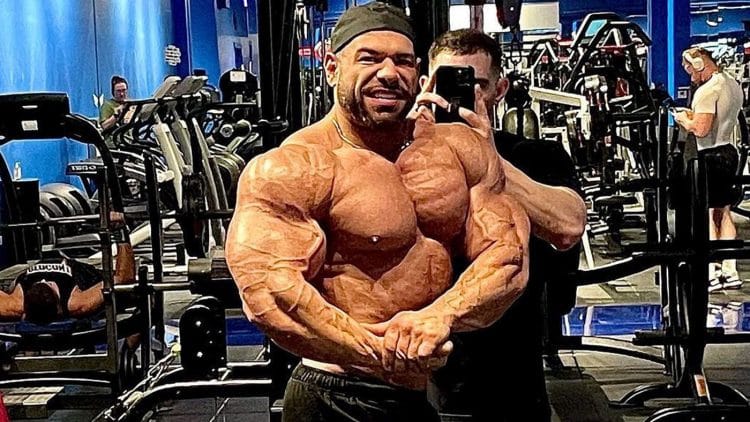 The 2021 Arnold Classic is set to take place on September 25th, with the winner of the Men’s Open getting an invite to the 2021 Mr. Olympia. Ahead of this contest, Steve Kuclo is looking to be a serious threat to winning that invitation.

Kuclo had a strong showing at the 2021 IFBB Texas Pro, but ultimately came in second place to Iain Valliere. This was seen as somewhat controversial, given that Iain had already qualified for the 2021 Olympia by winning the Tampa Pro a week earlier, but nevertheless the result stands.

So now Steve is out for his final chance to qualify for this year’s Olympia, by competing at the Arnold Classic, in which just the Men’s Open winner can qualify. Just under two weeks out from this major show, Steve posted an update to his Instagram that shows him look massive and extremely vascular, ahead of the contest.

“Side Chest Saturday!
Competition isn’t just about the grind… it’s about grinding for results. It’s about doing work that actually works!
*This pic was taken 2 weeks ago,” Kuclo captioned.

As Steve explained in the post, this photo was technically taken a couple of weeks ago, roughly four weeks out from the Arnold. However since then he has continued to work hard on his prep, meaning that he is almost certainly going to look even better when it comes time for him to take the stage in Columbus.

In fact, Steve Kuclo has shared some insight into his training process, as the weeks tick away and the Arnold Classic gets closer. Judging by the updates he has been posting to his social media, it seems that he is pushing himself to the absolute limit to win this contest and get the sour taste of what happened in Texas out of his mouth.

In an earlier post, Steve was seen working his chest even more with some pec decks, before doing a static hold to show off his insane pump from the hardcore workout. It is clear from this that he is looking even sharper now, than he did two weeks earlier.

To be absolutely clear, Steve Kuclo is looking to go head to head with a plethora of the best bodybuilders in the world, competing at the 2021 Arnold Classic. With it being so close to the Olympia this year, this is one of the best lineups in the contest’s history, but Steve is absolutely up there as someone to take seriously at this event.