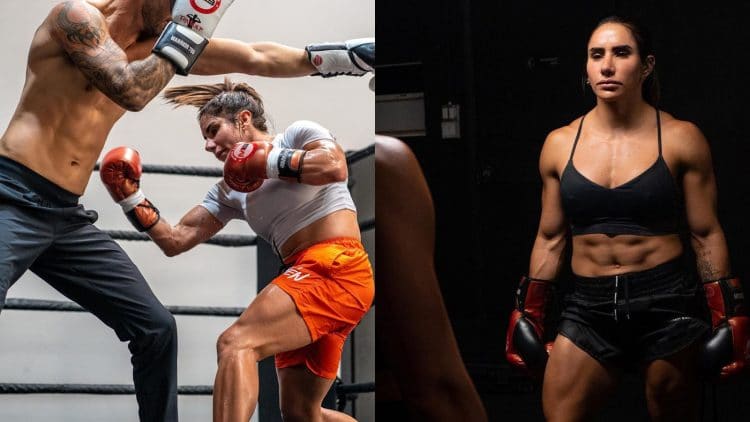 Venezuelan-American powerlifter Stefi Cohen is one of the best powerlifters in her weight category. After making a name for herself as a powerlifter, entrepreneur and trainer, she delved into the world of boxing earlier this year. The 29-year-old passed with flying colors in her new endeavor when she knocked out Haydee Zafaa (4-4 Boxing) in her debut fight on June 4, 2021.

Stefi is set to return to the boxing ring this weekend to face Colombian Boxer Marcela Nieto (2-0 Boxing). While it would be perfectly alright for a cross-over athlete to feel the pressure of the moment heading into fights, Cohen’s excitement to throw down with Nieto has been on full display in her recent social media posts.

Cohen posted the video of her first workout of the fight week since landing in Dubai and courtesy of her Instagram, you can watch it here:

In another post a few days back, Stefi Cohen was seen practicing movement drills with Cuban boxing coach Pedro Diaz. As a boxing trainer, Diaz has prepared a number of boxers and MMA fighters in high-profile fights, including former UFC Welterweight champion Tyron Woodley, who put on a great showing against Jake Paul in a recent Showtime boxing event.

“My professor, friend, master, mentor. Thanks for another amazing camp @dr.pedrodiaz” she wrote in Spanish before adding:

“Flying out to Dubai today for my second professional fight. LFGGGGG 🔥😈”

Hailed as one of the strongest women powerlifters in the world, Stefi Cohen holds over 20 world records in powerlifting. Always keen on challenging her limits, Cohen broke three all-time world records in one night at Hybrid Showdown II on February 1, 2021. Considering these aspects, it is only natural to see her try her hand at boxing.

Haydee Zafaa’s less-than-impressive 4-4 record in boxing took away a lot of shine from Stefi Cohen’s debut win. Her next opponent is also a relatively inexperienced contestant which is likely to have a similar impact on Cohen’s resume. However, a couple of impressive wins could land her in a position to take a step up in competition – allowing her to prove her mettle against more accomplished names.

Stefi Cohen and Marcela Nieto will compete on the undercard of Hafthor Bjornsson vs Devon Larett. The event will take place at The Sports Society in Dubai, United Arab Emirates. Fight night will begin on Saturday, September 18 at 7AM PT / 10AM ET.