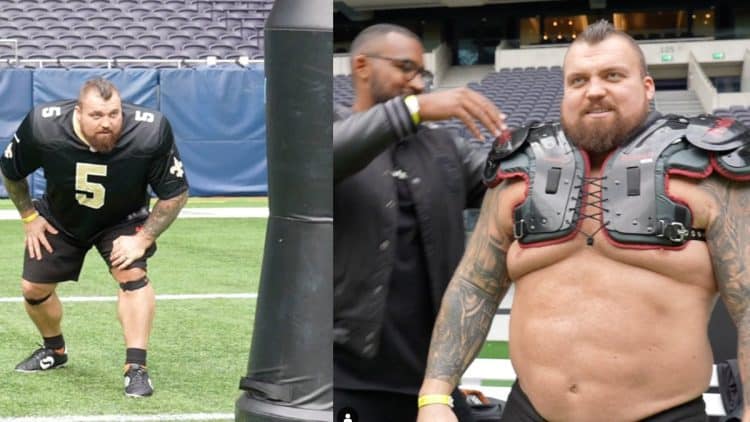 Ever since he wrapped up his Strongman career, Eddie ‘The Beast’ Hall has been exploring other sports to see what his limits are. Eddie’s most notable transition into boxing occurred when he and his former Strongman rival agreed to a fight that was a worldwide sensation. However, upon losing to Hafthor via a unanimous decision, Eddie seemingly lost interest in boxing. However, he continued having fun in other ways, which led him to try different sports. Most recently, Eddie Hall adventured into NFL, having experienced what athletes go through to reach the highest stage.

Eddie Hall shared a video titled “Trying Out For The NFL!!!” to his YouTube channel on October 23rd which saw him attempt the respectable NFL Combine Test.

Seeing as most NFL players are large and strong, it was interesting to see a former World’s Strongest Man try to compete with them. Aside from testing his speed and quickness, Hall also demonstrated some technical abilities.

In order to achieve a full experience, Eddie Hall invited former pro players Christian Scotland-Williamson and Jack Crawford to the Tottenham Hotspur Stadium in London, which is also recognized as the UK home of the NFL. Jack and Christian made sure Hall performed exercises according to the rules and gave him a few tips.

Eddie Hall started off by giving his own view on the tests and predicting the outcome of it.

“I can’t catch, I can’t throw, I can’t run,but I’m probably good at mowing people down.”

After squeezing in some protective gear, Eddie Hall made his way to perform the 5-10-5 shuttle drill. This is a test of agility and quickness, which Hall admitted was arguably his weakest spot. He was pleasantly surprised by his time of 5.15 seconds, as this is an incredible result for a man of his size.

The next test was the broad jump, where Eddie Hall’s result came out to 6.5 – 7 foot. However, the protective gear limited Hall’s mobility and thus his capability to complete this event as best as he could. Nonetheless, he quickly moved on to the 40-yard dash test. Once again, Eddie turned out to be surprisingly quick having finished with a time of 5.73 seconds.

“That’s better than a lot of offensive lineman in the NFL. Very impressive.” said Jack Crawford.

While Eddie Hall did not perform the bench press at the Tottenham Hotspur Stadium, he shared a video of him bench pressing 100 kilograms (220.5 pounds) for 44 repetitions with full lockout from just a week prior to this NFL Combine Test.

The measurements from these tests do give good insight, but in the NFL, technical ability is what really counts. So, Eddie Hall also had to perform some tackles. He did not hold back at all, having bruttaly pummeled every training doll that stood in his way. Hall then managed to score a 30-yard field goal and score a touchdown.

“All around success. I think I’m ready.” said Hall.

Related: Eddie Hall Reveals Full Day Of Eating Ahead Of His Strongman Comeback

Eddie Hall retired from Strongman in 2017, but he is returning to the sport for one last time. The special occasion which baited him to come back is the first edition of the World’s Strongest Nation, which is set to take place on November 26, 2022, at the M&S Bank Arena in Liverpool, England. Hall will be a captain of Team UK and judging by this performance in the NFL Combine Tests, he is ready to lead them to victory.