Liver King praised the popular podcast host and called him out for a debate. 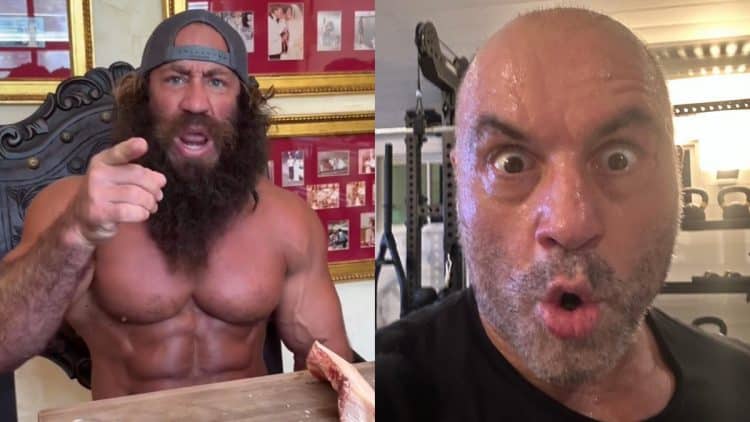 Social media sensation Liver King has quickly become one of the most popular fitness influencers courtesy of his insane physique and raw meat diet. In a recent Instagram post, he called out UFC color commentator Joe Rogan and gave him praise.

Liver King first made headlines for his unique lifestyle of living like a ‘primal’ based on the nine ancestral tenets. His videos of eating raw meat went viral and he quickly amassed over 1.7 million followers on Instagram. Last month, King devoured a raw egg every 10 seconds for a minute straight to encourage his fans to consume more eggs.

King shares a fierce rivalry with popular podcast host Joe Rogan. who took issue with the 45-year-old’s claims of being natty. According to Rogan, there is no way the 45-year-old could be natural, and even went as far as to say that King has “got an a** filled with steroids.” He also said, “that’s not a natural body” when examining his physique. King did not take the hit lying down and tried to change the narrative by suggesting that he was a freak of nature and thanked Rogan for helping spread awareness about his message.

In August, Liver King followed up with a satirical skit in response to Rogan. He claimed to have got his blood work done by a doctor, who later turned out to be himself in a video parody. The results simply showed ‘primal.’ He reiterated his stance in September, calling on Rogan to invite him on his massively popular podcast show, Joe Rogan Experience. King remained respectful in his speech towards Rogan but highlighted the danger of his criticisms.

Liver King calls out Joe Rogan: ‘I usually kill ’em with spears but I’m obliged to kill with kindness’

In a recent post made on Instagram, King shared a video compilation of Rogan bashing him for his claims of being natural. He praised Rogan and proceeded to issue yet another callout.

Then, I’m obliged to kill ‘em with kindness.

Liver King has the most profound respect for Rogan… reciprocal or not. He’s spent decades putting in the work. He’s living a “true north” life of principle and purpose…

He’s willing to challenge social norms and break new ground to help people who are struggling and suffering.

Liver King and Rogan probably have far more in common than he thinks (for example, we both like to say Liver King’s name a lot)…

Perhaps one day, we’ll find out.”

The video featured clips of Rogan criticizing King. Meanwhile, King revealed Rogan to be one of the four people in the world he respects the most.

“Yeah, I’m on testosterone, unlike the Liver King I’ll tell you the truth,” Rogan said. “That guy is shooting all kinds of s**t into his system to achieve that kind of a physique. Living off the nine pillars of health and sustainability or whatever the f**k it is. Liver and testicles, and drinking blood it’s a gimmick. Liver King thing drives me nuts cause that guy’s on steroids.””

Liver King said, “Four people I hold in the highest regard; George Washington, Chuck Norris, Rocky Balbo, and Joe Rogan. But guess what I’m not surprised when I see a giant like Joe Rogan, that’s jacked and ripped, articulate as f**king hell, doing what nobody’s ever done before. I ran to my wife and told her, ‘oh my god! Can you believe Joe Rogan is talking about me?”

Liver King has been growing his presence in the mixed martial arts community as of late. He recently got into a liver-eating challenge with UFC middleweight Paulo Costa. King defeated the former title challenger handily. Costa complained that Liver King used seasonings like salt, while the UFC bruiser had to eat it bare.

Rogan is yet to respond to King’s comments. While Rogan has mentioned Liver King on a number of occasions, he hasn’t welcomed him on the podcast.