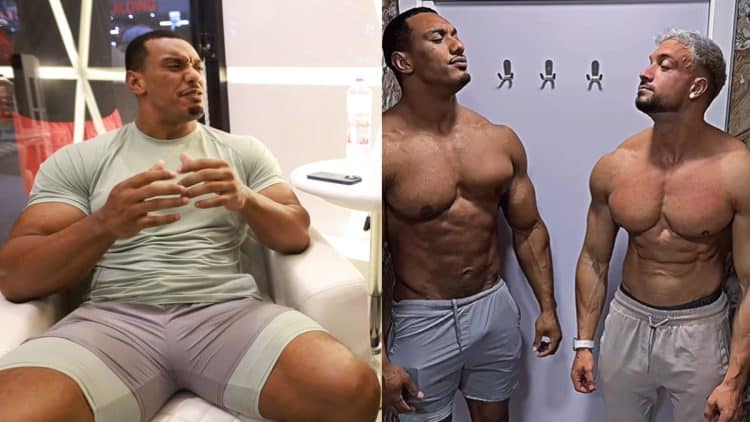 Wheels cemented his name among the best in the sport of powerlifting. In addition to countless PRs in the training room, he has also tested his strength by competing in strongman, arm wrestling, and bodybuilding. While all signs pointed to Larry competing at the 2022 Middle East’s Strongest Man contest, those ambitions were sidelined following a back injury.

In late August, Wheels decided enough was enough and he stopped taking all steroids. Instead, the 27-year-old announced that he would purely use testosterone until further notice. It didn’t take long for Wheels to witness his body change.

Wheels shared a picture of his face recently and compared it to when he was influenced by ‘peak steroid abuse.’ The image left many in shock because Larry looked much older back when he was taking a number of compounds.

Following a month of just using TRT, Wheels showed off a lean physique update. He joined ‘Joesthetics’ to discuss the differences between bodybuilding/powerlifting cycles as opposed to using gear simply to build a better physique.

Larry Wheels and ‘Joesthetics’ Break Down Their TRT Treatments

In the video, Wheels and Jo revealed their current testosterone protocols.

“I don’t know if you guys may or may not know by now, but I have completely stopped taking PEDs aside from TRT which is testosterone replacement therapy. I’m on 175 milligrams a week. I’m approximately seven to eight weeks off of a cycle. My goals, my plans for long term, as of right now, I don’t see any necessity to go on a blast again,” Larry Wheels said.

Wheels plans to stay on TRT for the foreseeable future.

“I intend on staying on TRT for the long run,” Larry Wheels shared.

Larry takes 175 milligrams of test a week, whereas Jo typically uses around 200 milligrams.

“TRT for me and my size level would be variating from 75 milligrams a week to up to 175 milligrams a week. To be honest, I’m doing one shot of test every ten days. So, that’s technically 250 [migs] right but it goes up and down as the body declines. I would say it’s probably similar — probably 175, maybe it goes up to 200 [milligrams],” says Joesthetics.

According to Wheels, he noticed differences when he injected test every seven days. He specified that it affected his libido, mood, training, and strength levels.

“Libido, sleep, linear progress, things were just more consistent when I was pinning every day. When I’m pinning every four days, however, I don’t feel a significant difference with my libido, my mood, my training, my strength, my weight isn’t fluctuating. But now, when I pin every seven to ten days, I do find it to be a bit of a rollercoaster, especially the libido,” Larry Wheels shared.

Jo says he encountered some issues with Gynecomastia while using testosterone. He said he needed an estrogen inhibitor after his levels ‘skyrocketed.’

“I’m very different. I’m hypersensitive to that stuff. If I was just using 500 of test, I couldn’t do it without getting gynecomastia [swelled breast tissue] because I would have had to take an estrogen inhibitor because my estrogen was skyrocketed through the roof. Estrogen is important guys, you keep that in check. It’s not just how you feel. It’s about having proof on paper,” Joe added.

Wheels: ‘When I Was Competing in Bodybuilding, Insulin Was Mandatory’

According to Wheels, Insulin was a must during his time competing in bodybuilding. He believes Insulin and IGF-1 to be the only two drugs that gave him a ‘skin-splitting’ pump.

“When I was competing in bodybuilding it was mandatory that I was taking Insulin. I remember when I started working with my coach, he prescribed me Insulin and Growth Hormone. I believe it was pre and post workout, I was taking about eight to 16 units, depending on what I was training.”

There’s only two things I’ve ever taken that gave me a truly skin-splitting pump — and that would be Insulin and IGF-1. Growth Hormone — I’ve taken it by itself, I couldn’t tell you if it did anything at all. Maybe it made my waist slimmer and tighter, [that was] probably a placebo,” Wheels said.

‘Joesthetics’ says Insulin was advertised as the ‘magic sauce’ during the years he emerged as a prominent influencer.

“This is a really really big thing I wanted to touch on because I have never spoken about this. I would have been using GH also, I would have tried it because everyone in the fitness industry is like, ‘this is the magic sauce bro. If you want to be shredded as hell and you want to be big, you got to get on the growth hormone.'”

“I used it six months. I didn’t find any difference at all with this stuff. And it’s expensive, then you don’t know if you got real stuff. It’s a big big struggle,” Joe said. “I can personally say, bro you probably don’t need any GH in your life man because you are wasting money and it’s not a magic pill to transform you.”

These aren’t the only compounds Wheels has discussed at length. He recently gave his thoughts on using Trenbolone. Wheels had a negative experience taking it and said his time on the drug was a ‘living hell.’ Conversely, bodybuilder Nathan De Asha has sworn by Trenbolone and mentioned that it doesn’t give him aggression when using it.

There were differences between the cycles Larry used for bodybuilding/powerlifting versus what ‘Joesthetics’ used as a fitness influencer, most notably, Insulin. While they both argued against Growth Hormone, Wheels and Jo appreciate what testosterone replacement therapy has done for their overall health.