Eddie Hall is back to eating almost 5,000 calories with just three months until his exclusive Strongman appearance. 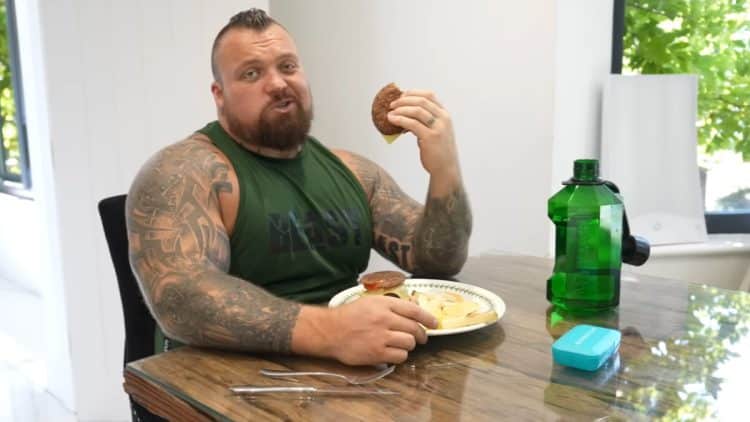 Eddie Hall has always been notorious for his size, which gave him the nickname “The Beast”. After finishing his Strongman career, during which Hall tallied 400 pounds of bodyweight, 2017 World’s Strongest Man still retains a significant amount of muscle mass. It’s impossible for a normal man to fathom how he managed to do that, but maintaining a strict training regime and diet played a big role. Hall has now revealed what his full day of eating looks like, as he recorded and shared all of his meals on YouTube.

Eddie Hall is currently preparing for his special Strongman comeback, as he is set to compete at the 2022 Giants Live World’s Strongest Nation. This competition will be held on November 26, 2022, at the M&S Bank Arena in Liverpool, England. Hall will be the captain of Team UK, who will go against Team USA.

Although Eddie Hall’s wife usually prepares all the meals for him, on this day of filming he had to do it himself. He opened the day up with a protein shake, which consisted of milk, peanut butter, bananas, some chocolate spread, and most importantly, some protein powder.

“I am going to say about 65 grams of protein in there with the milk, peanut butter, and the protein powder.”

Before going out on a walk with his dog, which is also his morning cardio, Eddie Hall stepped on a scale to measure his weight. According to the scale, he weighed 160.45 kilograms (353.7 pounds), which means he had gained significant weight since his boxing fight against Hafthor Bjornsson earlier this year.

Before going out to perform a training session with Martyn Ford, Eddie Hall started to prepare his lunch. His menu included chicken wraps, so he cut the meat into smaller pieces with scissors. However, he had to put everything on pause, since he forgot to pick up his son. Upon coming back home, Eddie finished cooking his chicken and cut up the onions, tomatoes, and coriander. He packed it all in his special wraps, which contain more protein than usual.

Eddie Hall made some additional chicken wraps for his post-workout meal, but he specified that his total calorie intake after lunch and the workout came out to 2,800. He also consumed 305 grams of protein at this point.

“Beast Burgers” were on the menu for Eddie Hall’s final meal of the day.
In addition to making two burgers, he added burger sauce, tomatoes, and cheese. Hall also ate some poorly made potato chips/fries and was supposed to have some bacon, but he burnt it.

Eddie Hall’s total for the day came out to 4,600 calories and 385 grams of protein with just three meals.

Related: Eddie Hall Teaches His 10-Year-Old Son How To Perform His First Ever Deadlift

Eddie Hall finished his incredibly successful Strongman career in 2017, straight after winning the World’s Strongest Man competition. Since that was his lifetime goal, he didn’t want to necessarily put his health at risk after achieving it.

Hall also gained fame for becoming the first person to deadlift 500 kilograms (1,102.3 pounds) in 2016. That would also end up being the reason for his fight against Hafthor Björnsson, since “The Mountain” broke that record by 1 kilogram (2.2 pounds).

Although it is far from his old Strongman diets, Eddie Hall’s full day of eating still looks very brutal. He is consuming an extremely large amount of calories, but it is important to see that he is also focused on proper protein intake. This is how Hall maintains his muscle mass and a healthy lifestyle.