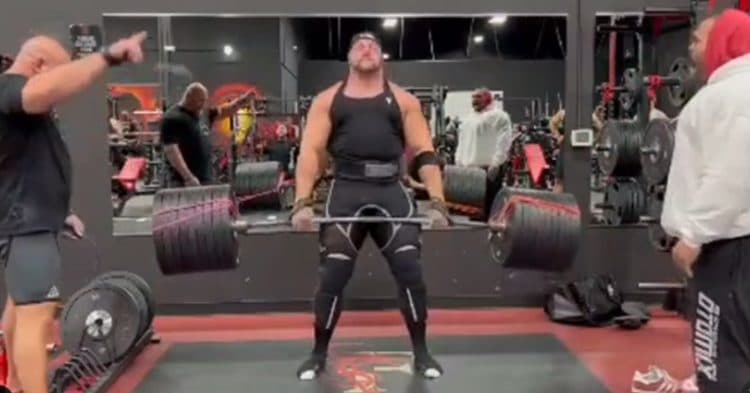 Evan “T-Rex” Singleton is back to his best after struggling with a bicep tear for a long time. He got injured in his debut World’s Strongest Man (WSM) competition in 2020. Evan recently partnered up with 10x WSM competitor Nick Best, for an exciting training session in which he ended up deadlifting a bar-bending 388 kg (855 lbs) for two repetitions.

The training room was filled with energy, alongside a hyped-up Evan Singleton. Some lifters like to get a spotter to slap their back in order to get some anger channeled. Evan, on the other hand, bashes his head against the closest squat rack and starts bleeding because of it. Alongside that, he also took a serious whiff of smelling salts. The accessories he used for the lifts were a lifting belt, knee sleeves, and wrist straps. The bar was loaded to its limits, so Evan secured the weights with resistance bands.

This post displays both the lift and consequences of Evan’s headbutt:

“This was so much fun. Gym was awesome, and the atmosphere was amazing. I can’t express how much I love training with Nick. The man is such an inspiration, and it’s seriously humbling hearing some of the kind and motivational words he says to me.”

Evan is a former wrestler and a relative newcomer to the sport of strongman. At 29-years-old, he has only competed for a few years. His first sanctioned competition was the 2018 Giants Live North American Open. He also took part in two WSM competitions but has not qualified for the finals in either.

Evan will not compete at any major competitions soon. His aim is to get prepared for the 2022 World’s Strongest Man, scheduled for May 24-29 in Sacramento, California. Apart from that, Evan will attempt to break the Circus (Cyr) Dumbbell World Record at the Clash on the Coast Record Breakers. The event will happen on April 22, 2022.

“Feeling how I do now, I feel it’s a great way to get myself ready for WSM and grab my first world record since so many people want to see them, lol. Super excited to be doing this, and I can’t wait!!!”

As he said, Evan Singleton will grease up his wheels for the 2022 WSM with a World Record attempt. If he claims the record, it will definitely be a significant boost for the rest of the season. Evan’s latest deadlift proves that he is getting much stronger, and judging by that, he could possibly put up a great performance at 2022 WSM later this year.

The No-Press Deltoid Workout (For Lifters with Sore Shoulders)