Temur Samkharadze broke the record which was previously held by a new Strongman sensation, Pavlo Nakonechnyy. 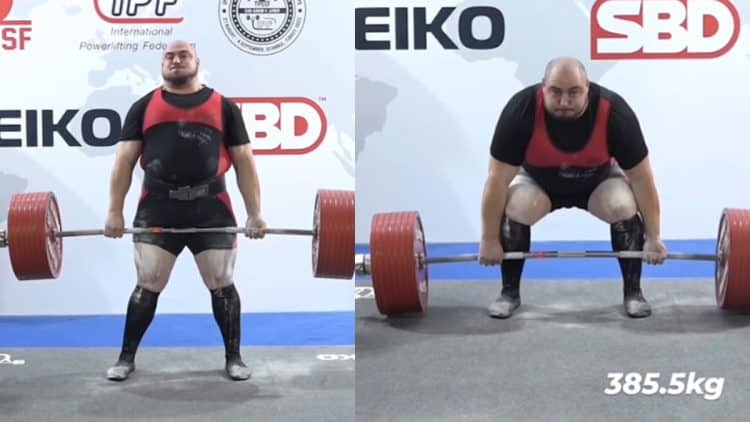 Another athlete from Georgia rose to success in a strength sport, Temur Samkharadze put up an incredible performance at the 2022 IPF World Sub-Junior and Junior Powerlifting Championships. The most prestigious powerlifting competition for the younger age divisions took place from August 27 to September 04, 2022, in Istanbul, Turkey. Having been born in 2001, Temur competed in the raw Juniors division of the +120-kilogram weight class, which he dominated, to say the least. In fact, the difference between him and the second-place finisher was 133 kilograms (293.2 pounds), which speaks for itself.

Apart from gliding his way through the competition to claim a gold medal, Temur Samkharadze had goals to accomplish. The main one being the deadlift Junior World Record, which he successfully scored by pulling 385.5 kilograms (849.9 pounds). Temur only used a lifting belt, while his stance was conventional.

Pavlo Nakonechnyy previously held the record of 385 kilograms (848.8 pounds), which he set at the 2018 EPF European Classic Powerlifting Championships. Pavlo moved to Strongman shortly after this and is now one of the greatest rising stars in that sport. He also claimed his first Strongman win just a month ago at the 2022 Giants Live World Open & World Deadlift Championships.

Now that Temur Samkharadze is putting up even better deadlift performances, we can only look forward to his future.

Temur Samkharadze only missed two attempts at the 2022 IPF World Sub-Junior and Junior Powerlifting Championships, one bench press and one deadlift. He also scored three new Competition PRs, only coming short of his bench press personal best by 2.5 kilograms (5.5 pounds).

*Temur Samkharadze has a heavier bench press competition PR of 222.5 kilograms (490.5 pounds), which he set at the 2022 IPF World Bench Press Championships.

Despite only competing in his fourth sanctioned powerlifting meet, Temur Samkharadze has already established a World Record at the 2022 IPF World Sub-Junior and Junior Powerlifting Championships. He has won three times, so his sudden rise looks very similar to that of Jesus Olivares.

Temur Samkharadze seems to be a generational talent. However, he still has to gain some experience and train extremely hard to fulfill his potential. If that is the case, Temur could become one of, if not the only man able to rival Jesus Olivares in the +120-kilogram weight class.

Bodybuilder Michal Krizo Discusses Training and 2022 Olympia Campaign: ‘The Plan is to Be as Big as Possible’