Bodybuilder Michal Krizo Discusses Training and 2022 Olympia Campaign: ‘The Plan is to Be as Big as Possible’

During a recent Q & A, popular Men's Open prospect Krizo shared intricate details about training and how he plans to earn his Pro card next month. 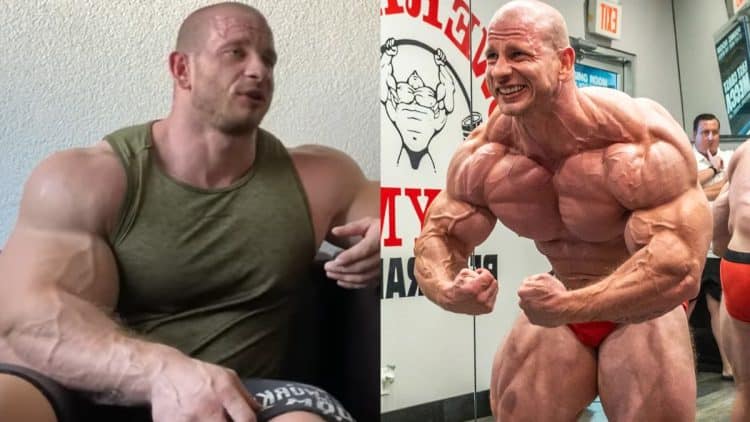 Michal Krizo is one of bodybuilding’s most talked about names despite having yet to earn his Pro card in the IFBB Pro League. In a recent Q & A video, Krizo discussed a wide range of topics, including his weight/height and training as he continues his campaign to compete at 2022 Olympia.

Krizo recently made the switch from the IFBB Elite Pro League to the NPC. Hailing from Slovakia, Krizo garnered attention quickly, courtesy of his giant biceps, full chest, and thin waist. He’s proven he has the tools to maintain size without sacrificing conditioning. Last month, Krizo shocked the bodybuilding community with a shredded physique update, where he pushed the scales at 293 pounds.

The mass monster made lasting impressions with a number of prominent figureheads in the sport recently. He visited bodybuilding coach Milos Sarcev at the Dragon’s Lair gym in Las Vegas, Nevada. After dissecting Krizo’s physique, “The Mind” believes pictures and videos online simply don’t do the bodybuilder justice.

Michal Krizo’s next stop saw him visit four-time Mr. Olympia Jay Cutler. Following the visit, Cutler was astonished by Michal’s frame and size. Like many others, he also sees Michal as 100 percent legit, and a problem for the rest of the Men’s Open landscape. In addition, the bodybuilding legend compared Krizo’s muscle fibers to seven-time Olympia winner Phil Heath.

After announcing the switch, Krizo laid out his plan to compete at the 2022 Mr. Olympia. As of this writing, he intends to earn his pro card at the upcoming Amateur Olympia Italy contest, scheduled for mid-October. Should he emerge victorious, the Men’s Open standout shared that he will compete at the 2022 EVLS Prague Pro competition in late October. Given his ambitious plans for this year, Krizo sat down to discuss his upcoming season.

In a recent Q & A video featured on his YouTube channel, Krizo opened up about his weight, height, and competition plans.

“133 kilograms (293 pounds) I don’t plan a conscious weight. We’ll see. The plan is to bring the best possible conditioning and hardness and of course, to be as big as possible. Everything. Everything has to be 110 percent,” Krizo said.

Before sharing his competition plans, Krizo specified that he’s 32 years old and stands at 6″1′.

According to the Men’s Open competitor, the plan hasn’t changed and he still intends to compete at the upcoming 2022 Amateur Olympia Italy contest. He added that 2022 Romania Muscle Fest Pro is a possibility but only after he competes at the EVLS Prague Show next month.

“The pro qualifier will be Olympia Amateur [Italy]. I think that’s the eighth, ninth, and tenth of October. Then right after that, considering I get the pro card, there’s EVLS Prague Pro, which is the last week of October. If I manage to win there, which would be absolutely amazing. I would go to Olympia this year.”

“We will try to qualify for this year’s Olympia elsewhere [if we don’t qualify at the Amateur Olympia contest]. Yes. There’s another contest to qualify in Romania but that will unfold only after the Prague show. If I ended up like 7th or 8th in Prague, there would be no point in going to Romania.”

Related: Bodybuilder Michal Krizo Reveals Every Meal He Eats in A Single Day

Despite his impressive size, Michal Krizo doesn’t partake in cheat meals unless his coach instructs him. He added that all of his cheat meals are ‘planned.’

“Yes. If it’s necessary. If my coach sends me to have some — if I’m too conditioned ahead of time and I should eat something, then I go. Yes, it’s planned. But me personally, I don’t need it. I don’t crave it. I only go when I’m ordered to go. I don’t have a favorite. I don’t know, I like tribe soup, I like Bryndzove pirohy [Slovakian potato dumplings with sheep cheese and bacon]. I like goulash, it doesn’t matter. I also like to eat sweets,” Krizo explained.

During prep, Krizo trains six days a week instead of five. He prefers to not combine body parts and added that he doesn’t train abs unless he’s preparing for a contest.

“I train more often as it gets closer to the contest. I train six days a week instead of just five. I do one or two more exercises per body part. So, for instance, I don’t train chest and biceps in one workout. But I train chest alone and arms alone in another workout. I also start training abs before a contest. I don’t train abs in the off-season. Only in the contest prep when there’s not so much food.”

Regardless of the workout, Michal always practices in rep ranges of 15-20 reps, or ‘at least’ 10.

“There’s usually one heavier exercise for a body part where I do less reps, around eight to 10. Then, there are sets where I do 15-20 reps — I go by how I feel. I just grab the weights and I go. But if you noticed, I do more reps. I don’t do low reps. I don’t do for example four or six reps; you wouldn’t see me do that. I do at least 10.”

Krizo admitted that Dennis Wolf was one of his favorite bodybuilders when he started his journey in the sport. He also drew inspiration from bodybuilding legends like Dorian Yates, Flex Wheeler, and Ronnie Coleman.

“Not so much anymore. But when I was just starting out, it was Dennis Wolf. He was my favorite. Dorian Yates, Flex Wheeler, Ronnie Coleman, of course, the best ones from the 90s,” says Krizo.

Even though he hasn’t earned a Pro card yet, former Mr. Olympia Samir Bannout sees Michal Krizo making a huge impact in his new league. Bannout believes Krizo has better arms and a bigger v-taper than popular Men’s Open standout Nick Walker. The bodybuilding legend shared that Krizo has the potential to win 2022 Mr. Olympia on his first attempt.

With a little over a month until his next show, Krizo is addressing his prep in a comprehensive manner to ensure he brings the best package possible. If Krizo is unable to win the 2022 Prague Pro in October, then he will consider competing at the 2022 Romania Muscle Fest Pro to earn his invitation to Mr. Olympia this winter.

Bad Chest Genetics and How To Build a Barrel Chest