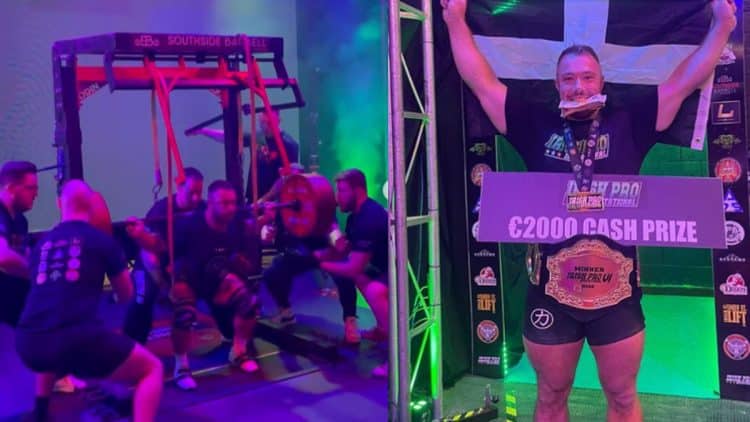 A number of surprising performances were seen during the 2022 IrishPO Irish Pro Invitational VI, which took place on August 28th, 2022, in Limerick, Ireland. In fact, we saw that Julia Mills broke the UK Total Record to solidify her legacy as one of the greatest female powerlifters from her region. However, Chris Pugh somehow managed to outperform that and steal the spotlight. Although he did win the overall male division, it was his incredible 366-kilogram (806.9-pound) squat that blew everyone’s mind.

Chris Pugh performed the squat with knee wraps and a lifting belt, so it was not raw. Despite this, it broke the U82.5KG All-Time Squat W/Wraps World Record by 1-kilogram (2.2 pounds). Maliek Derstine previously held that record, since his squat from the 2020 USPA Dirty South Powerlifting Championship came out to 365 kilograms (804.7 pounds).

There was some controversy about Chris Pugh’s new record, since another elite powerlifter, Joe Sullivan, thought that he did not squat deep enough. However, what was most important is that the judges at the competition deemed the squat deep enough, so Chris Pugh’s new record became official. In addition, Chris has gotten a lot of support from people who also filmed his squat, but did so from different perspectives. It was evident that Chris’ squat was deep enough in these videos, but it is inevitable that he will prove it once again in the future.

Chris Pugh broke the All-Time Squat World Record on his second attempt and tried to add another 9 kilograms (19.8 pounds) on his third one, but was ultimately unsuccessful.

*Chris Pugh has a heavier deadlift competition PR of 307.5 kilograms (677.9 pounds) from the 2020 GPC European Championships.

At 29 years old, Chris Pugh has amassed immense success in his career, to which he now added an All-Time World Record. He has also taken part in 26 sanctioned competitions and claimed 18 gold medals. A few of his most notable wins include the 2019 GPC World Championships and the 2020 GPC European Championships.

As for when Chris Pugh will compete next, it is unclear, but he will likely attempt to set an even heavier squat to combat those who doubt his record. Regardless, he now holds the records, so nothing else matters.