Dwayne 'The Rock' Johnson showed off some weighted lunges during "The Walk Of Hell" routine he's recently endorsed. 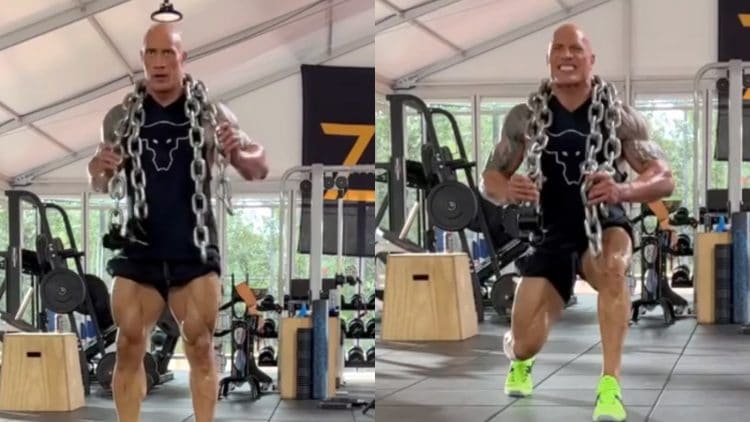 In preparation for The Rock’s new movie role in Black Adam, the former wrestling star has undergone a considerable body transformation. Shooting for the film has wrapped but ‘The Rock’ continues to work out as the star recently powered through some weighted lunges with chains attached to his neck on Instagram.

Anyone who has followed the career of Dwayne “The Rock” Johnson understands his “rise and grind” attitude. Dwayne Johnson is all over the place in cinema and the professional wrestling star parlayed his handiwork into a career in Hollywood. Johnson’s physique and physical stature have been lauded by fitness enthusiasts and just about anyone who is looking to build muscle.

The entertainer has had a significant impact on the big screens. The Rock has been featured in countless films. Some of his works that stand out include G.I. Joe: Retaliation, Journey 2: The Mysterious Island, and of course, his voice-over work in the hit Disney movie, Moana. Similar to his unwavering work ethic in the gym, The Rock is always staying busy eying future filming prospects.

Living life in the fast lane, sometimes it’s hard to keep up with The Rock. However, the superstar took to Instagram for a commercial and in the process graced us all with an insane walking lunge workout. The movie star was tasked with carrying chains around his neck weighing 120lbs. The Rock handled the routine in his private gym called, “Iron Paradise”.

‘Til the roof comes off, ’til the lights go out
‘Til my legs give out
I’ma rip this shit ’til my bones collapse ⛓💪🏾
~ @eminem Was intense, but we had fun shooting our bad ass @zoaenergy commercial that will air next month 🌍 120LBS of chains ⛓ wrapped around my neck, as we filmed 🎥 this “walk of hell” multiple times – so my legs were fucked up and on 🔥 at this point but the energy and mana in the gym carried us thru.
Can’t wait for you #ZoaWarriors to see our spot!
What DRIVES US, is what FUELS YOU.
ZOA ENERGY 💥🍃
Sip your ZO, now LFG!!!” Dwayne ‘The Rock’ Johnson shared.

“The Walk Of Hell” is a routine The Rock has acquired while working on a Zoa Energy ad campaign. According to Dwayne Johnson, exercising with chains is one of his favorite ways to build muscle. The movie star finds that it adds an adequate amount of resistance and weight while exercising.

RELATED: The Rock’s Secret Diet and Workout Program To Get You Jacked

Dwayne Johnson is no stranger to insane gym workout routines. However, the film star admits that his experience shooting “The Walk Of Hell” drill has been one of the harder workouts he’s endured with heavy chains attached. Despite being one of the busiest actors in Hollywood, Dwayne ‘The Rock’ Johnson remains an important advocate for health, fitness, and just showed as much with his recent weighted lunge exercise.

Activities like running and lifting weights are good for your health, appearance, and body composition. However, combined with prolonged sitting...