The Rock Gives Tour of His ‘Iron Paradise’ Home Gym

The ripped superstar took fans around for a tour of his massive gym setup. 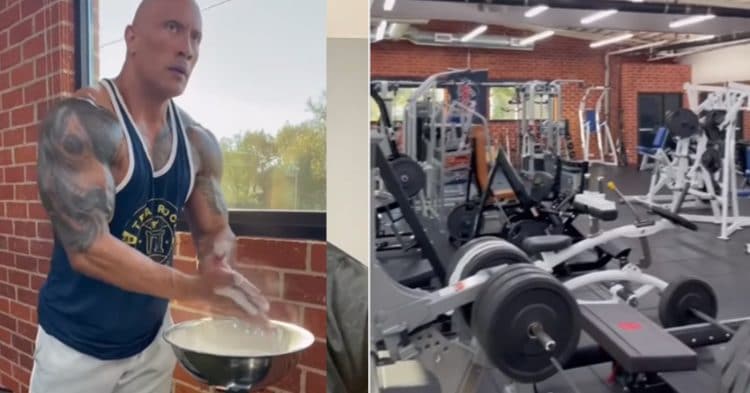 Given The Rock‘s ripped physique, it’s no surprise that his home gym is absolutely massive. The movie star recently gave fans a tour of his ‘Iron Paradise’ gym located in Miami Florida, and it did not disappoint.

Dwayne Johnson gave fans a bird’s eye view of his expansive fitness setup. The top-grossing actor shared his ‘Iron Paradise’ gym on his Project Rock Instagram page. The massive setup is a home gym, though The Rock’s fitness center is far bigger than most home gyms we are accustomed to seeing. Methodically designed with an emphasis on muscle building, The Rock’s fitness playground is well thought-out.

The Rock and the world of fitness go hand and hand. The larger-than-life celebrity is known for his inspirational social media presence. As a former wrestling superstar, Johnson enjoys hitting high-intensity workouts at his home gym. The movie star values his time exercising and equates it to a cathartic experience.

During his time in the spotlight, The Rock has emphasized the unique training philosophy that has helped shape his giant physique. As one of the biggest and baddest men in Hollywood, The Rock’s ‘Iron Paradise’ is a safe haven for the superstar to get that much-needed pump in.

Providing fans with a more in-depth look at his massive home gym, it appears this is where the magic happens for The Rock and his gargantuan physique. Courtesy of Project Rock’s Instagram page, fans get to see some of the equipment and instruments the superstar uses.

“Meet us in the #IRONPARADISE.” The Rock shared.

The Rock’s training paradise includes a vast number of professional-grade machines and training stations. Inside of the home gym sits a commercial Smith machine, a unilateral leg press, and a narrow runway of turf where The Rock hits his infamous “Walk of Hell” weighted lunge workout routine. In addition, the star also has a safety bar next to his squat rack. Known for burning the midnight oil, the celebrity’s gym is equipped to handle a diverse selection of exercises.

Johnson’s strength coach Dave Rienzi has indicated before that the movie star uses the safety bar during front and back squats to limit strain on his knees/back. That’s not all. The Rock has rows upon rows of highly graded Iron Grip brand dumbbells as well. His cardio equipment is made up of mostly Precor machines and products. In addition to the recent gym walkthrough, the movie star provided fans with an accidental tour of “Iron Paradise” while advertising new gear on social media.

While it’s certainly difficult to replicate The Rock’s gym setup, at least fans can build their own home fitness playgrounds with similar types of stations and equipment in mind. The movie star maintains a jacked physique year-round with the assistance of his “Iron Paradise” gym.

RELATED: Dwayne “The Rock” Johnson Shows Off Yoked Back After Workout

The Rock is an icon in fitness and Hollywood and is well known for his inspirational attitude towards life. After a brief tour of his ‘Iron Paradise’ gym, the celebrity still values hard work and staying active.

The Rock, AKA Dwayne Johnson is revered for his unwavering commitment to staying healthy and fit while still maintaining a...