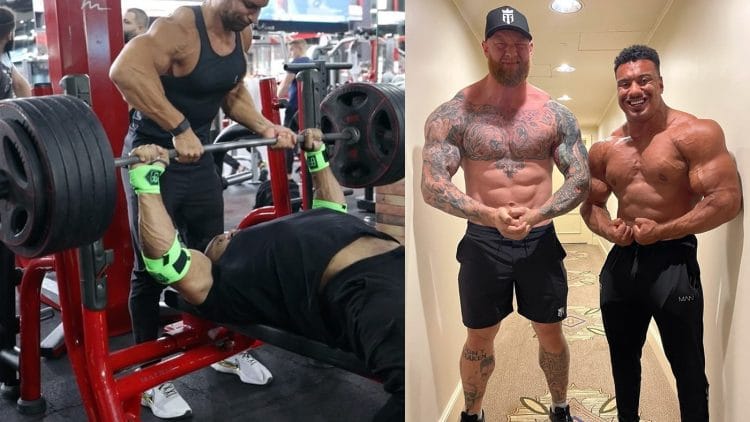 Powerlifter, bodybuilder, and arm wrestler Larry Wheels recently added a new feat to his incredible powerlifting resume. Wheels is a record-wrecking machine that has created and broken several personal records in the gym. While these endeavors have caused many injuries as well, Larry Wheels has overcome those and continued with his record-breaking ways.

Recently Larry Wheels bench pressed 240kg (529lbs) for six reps and 180kg (396.8lbs) for 21 reps in the gym. He executed the lifts using wrist wraps and elbow wraps. Courtesy of his Instagram account, you can watch the video of these incredible lifts here:

“240kg x 6
180kg x21
teampersonalrecord wrist and elbow wraps being used,” Larry Wheels wrote in the caption to his post.

As usual, Larry Wheels’ bench press video received widespread appreciation on the internet. Celebrity fitness trainer Joss Mooney and entrepreneur Bradley Castleberry were some of the big names that reacted to Wheels’ bench press. However, the most interesting reaction to the video came from strongman-turned-professional boxer Hafthor Julius Bjornsson.

The 34-year-old appreciated Wheels’ bench press but challenged him to go a little further and wrote:

“That’s insane! I challenge you to do 200kg for 20 reps!” Hafthor Bjornsson wrote in the comments section.

One of the most accomplished athletes in the strongman sports, Bjornsson is no stranger to record-breaking lifts himself. On May 2nd, 2020 Hafthor Bjornsson deadlifted 501kg (1104.5lbs) at the Thor’s Power Gym in Kopavogur, Iceland. The lift is recorded as the heaviest deadlift in history in the Guinness book of world records. In doing so, Hafthor Bjornsson broke fellow strongman-turned-professional boxer and archrival Eddie Hall’s record. Hall held the record for the 500kg (1102.5lbs) deadlift that he created in 2016.

Hafthor Bjornsson and Larry Wheels are close friends and have trained together multiple times in the past. Wheels was one of the vocal supporters of Hafthor Bjornsson for his boxing match against Eddie Hall and publically lent his support to Thor in the lead-up to the fight. He drew Eddie Hall’s ire a few months back when a social media post irked Hall to the maximum. Larry Wheels had shared the infamous decapitated head graphic on his Instagram account to showcase his support for Thor. However, it led to an awkward confrontation between him and Eddie Hall a few months later.

Larry Wheels and Hafthor Bjornsson have not collaborated for content in a while. Therefore, it will not be surprising if Thor’s comment on Larry Wheels’ post becomes a catalyst for an interesting video.