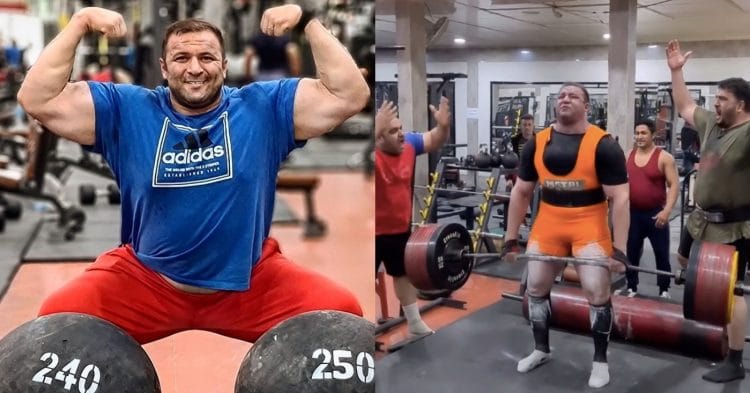 Over the last few years, Peiman Maheripourehir has shown himself to be one of the most skilled strength athletes coming out of Iran. He took things to a new level recently, with a deadlift world record.

As just the third Iranian to compete at the World’s Strongest Man, it is safe to say that Peiman has an entire country riding on his shoulders. He has been living up to that hype too, delivering some unbelievable impressive performances.

Over the years, he has come in second place at Iran’s Strongest Man, and qualified for the World’s Strongest Man on a pair of occasions. He also have five competitions on his powerlifting resume, winning each one in the +140kg division.

In fact, it was his powerlifting skills that has gotten Peiman Maheripourehir a ton of attention recently. This came when he shared a video of a recent deadlift to his Instagram page.

This video saw the 33-year old hitting a gigantic 455kg (1003lb) deadlift for three reps. If you think that sounds impressive, it is, as he was the first person to ever do this lift, scoring him a new world record.

That lift was super impressive, especially with how smoothy it moved all things considered. It was clear that Peiman had a little more in the tank, and it seems that he knows that as well.

In the post, written in Persian, he explained that he has his sights set on a 502kg deadlift, which would surpass Hafthor Bjornsson’s 501kg world record from last year. However he plans on trying to do a 475kg triple in the meantime, surpassing his recently acquired record.

Things have been going in the right direction for Peiman to accomplish this goal, too. If you take a look back at the 435kg deadlift double he hit back in December, his level of growth is beyond evident.

There are not a lot of people who have the potential to break Thor’s world record deadlift, but Peiman Maheripourehir clearly has a case to make for being a threat. These recent outings are proof of that.

Of course, there is a long road between this massive triple and 502kg, but his skills are definitely improving in ways that seem to suggest the world record is inevitable. It will be exciting to watch it all unfold.