Joe Rogan took to his podcast to discuss the timeless aesthetics versus size debate: 'no question about, I think [Schwarzenegger] that's a healthier and better look' 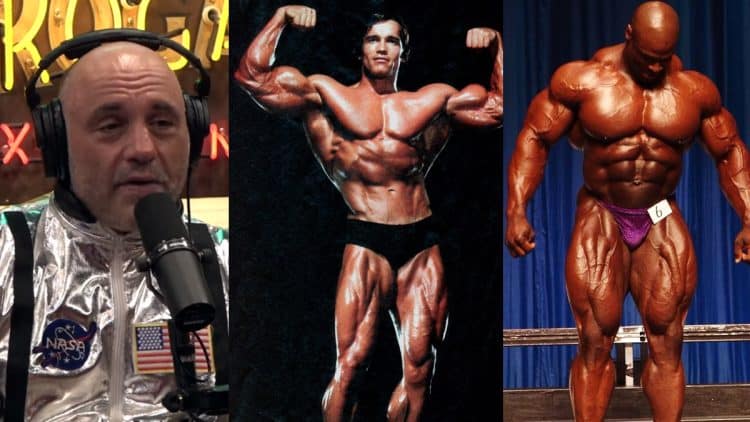 Joe Rogan is known for his podcasting empire and brings unique insight when discussing sports. In a recent video, Rogan spoke about golden era physiques, risks in the sport, and how Arnold Schwarzenegger would have fared against today’s bodybuilders.

Joe Rogan is well-respected for his ability to explain and discuss complex subjects. A jack of all trades, there isn’t a topic Rogan won’t touch on, and he does an excellent job conveying his thoughts each time he addresses his massive fanbase. He is a color analyst for the UFC and hosts the most successful podcast in the world, welcoming guests from all walks of life to discuss their experiences in greater detail.

Whether it’s a current event, or an athlete who wants to tell their life story, Rogan’s platform is ideal for conveying a message. Even though Rogan plays host, he is an open book and has shared plenty about his personal life throughout the years. In fact, the popular sports commentator detailed ‘everything he takes’ recently, shedding some light on the ‘stack’ he uses in order to maintain his physique at 54 years old.

Having hosted podcasts with bodybuilding legends like eight-time Mr. Olympia Ronnie Coleman and six-time Mr. Olympia Dorian Yates, Rogan appreciates the drive bodybuilders and powerlifters have developed through the years, eager to prove their dominance in varying disciplines. Rogan believes a lot of these athletes are misunderstood because people aren’t ‘involved in that culture’ and are unfamiliar with what it takes to stay on top.

Joe Rogan Defends Powerlifting and Bodybuilding: “This Isn’t a Game for These Guys, It’s Life”.

In a recent podcast episode, Rogan discussed what motivates powerlifters and bodybuilders to achieve greatness.

I know a lot of people think it’s silly because they are not involved in that culture.” Joe Rogan said on the podcast.

Rogan says, ‘lifting heavy shit’ is what these athletes live for. He added that people pushing the pace with 700-pound deadlifts, or 1000-pound squats are not ‘normal human beings’.

“This is life. Life is how much weight you can lift. It sounds crazy right? How come it’s okay if someone says life is bowling. Life is disc golf. For these guys, it’s lifting heavy shit. It’s the same thing. They dedicated themselves to this relatively speaking, obscure activity. Because everybody lifts weights, but not everybody powerlifts and does like fuc**ng 700-pound deadlifts and shit, and 1000-pound squats. These people are animals. These people are not normal human beings. That’s their thing.”

The podcast host is adamant that if someone is looking to generate strength and lift heavy weight, a powerlifting gym is the place to be.

“If you want to make people that all they give a fuc* about is lifting the heaviest fuc**ng shit humanly possible, that’s where you go. You go to a powerlifting gym. A lot of athletes went to him though, because he had like these wild methods of generating strength.”

After touching on powerlifting, Rogan switched gears and began discussing the popularity and risks associated with bodybuilding.

“They used to have UFC fights during the week of the Arnold Classic.” Rogan explained. “So Smart. Why not? That was back in the day. Is bodybuilding still as popular as it used to be?”

Unsure of bodybuilding’s current popularity, Rogan underlined some of the risks present in the sport, like excessive dehydration, an issue athletes commonly face prior to making their way onto a bodybuilding stage.

“Yeah, that look that they get right before they go on stage, man that is so unhealthy. That’s crazy that the most unhealthy time, they look the best. They are so depleted of water man. That’s part of the reason why they are so shredded. They are so dehydrated. They are blacking out. They have no body fat. They get down to like zero bodyfat. They are on like every fuc**ng chemical known to man.”

Rogan clarified that athletes in modern bodybuilding are taking more gear and depleting their bodies by staying lean for events over a long period of time.

“When you see those gigantic super-jacked guys that have like zero body fat… you can’t keep that going for very long, those guys are so lean. You can’t stay at that leanness for very long. You can stay pretty fuc**ng lean. Some guys have more of a natural tendency to stay lean compared to other guys. But when they get down to this, you’re on zero, you’re on empty.”

While Rogan is impressed by athletes playing the size game in today’s bodybuilding landscape, he says Arnold Schwarzenegger represented the sport with a ‘fantastic’ physique back when he competed.

“A lot of these guys get really tired after this stuff too. You gotta’ imagine, you’re flexing every muscle in your body and you’re dehydrated. But if you look back at Arnold [Schwarzenegger]. Look at that picture of Arnold right there. They say that he couldn’t compete with today’s bodybuilders but honestly, I think that looks better. I really do. He looks fuc**ng fantastic. He looks like a super strong giant man.”

Schwarzenegger has also voiced his support for bodybuilders sporting a Classic-stye physique, compared to the mass-monsters in the Men’s Open division. “The Austrian Oak” went so far as to say, Open bodybuilding is ‘dangerous’ and that Classic Physique ‘is the future’.

Unlike Schwarzenegger, Ronnie Coleman focused on size and staggering muscularity. However, he found himself in trouble in 2001, when he admitted to a near-death experience caused by excessive dehydration. In addition, Coleman suffered as a result of several back surgeries throughout his career, which left him unable to walk unassisted in retirement.

“I mean, obviously, he’s a bodybuilder, no question about it but I think that’s a healthier look, a better look for a bodybuilder than the crazy size these guys put on now. That, as a human, that looks better but then when you go to Ronnie Coleman in his prime, that’s way more impressive.

“Jesus Christ, his back is insane. Ronnie Coleman, look at the size of him. When he was in his prime, he was fuc**ng gigantic. Just massive. Ronnie Coleman was known for lifting really, really heavy weight, which is how he wound up injuring his back. He had like every disc in his back fused. Incredible. He was so big. The mass and power. He would do like ridiculously heavy weights.”

Related: Ronnie Coleman Opens Up To Joe Rogan About Getting Insane 13 Surgeries Post-Bodybuilding

After speaking with Yates on a previous podcast, Rogan said that the former champion had no regrets because he’s one of the greatest of all time in the sport.

“He did the podcast, he’s cool as fu**. He’s paid the price and he wouldn’t have it any other way. I’ve talked to him about it, and he has no regrets because he’s one of the greatest of all time, if not the greatest of all time. Depends on what you like. The Arnold days, it was Arnold, then there was Dorian Yates. Dorian Yates was a fuc**ng gigantic human being. Preposterously big.”

Yates is celebrated for having one of, if not, the best back in bodybuilding history. Though, Rogan maintains that when it comes to strength, powerlifters take the cake.

They have some fat on their bodies. They are bigger, and generally huskier looking dudes. I think when you have more weight, you can push more weight too. Maybe that makes sense somehow or another. Your body becomes accustomed to carrying it around but all they are thinking about is just fuel and power.”

After a lengthy podcast, it’s evident that Rogan understands some of the sacrifices necessary for reaching the top of a sport like powerlifting or bodybuilding. While he accepts that building muscle is part of the job description, he believes many athletes are far too concerned with size instead of health in today’s climate.

Watch the full podcast episode below:

Even though powerlifting and bodybuilding are seen as ‘obscure’ sports to many outsiders, Rogan said that these trials of strength are what athletes live for each day. While Rogan acknowledges the intricacies of both sports, he believes athletes in bodybuilding are consumed with adding size instead of prioritizing aesthetics.