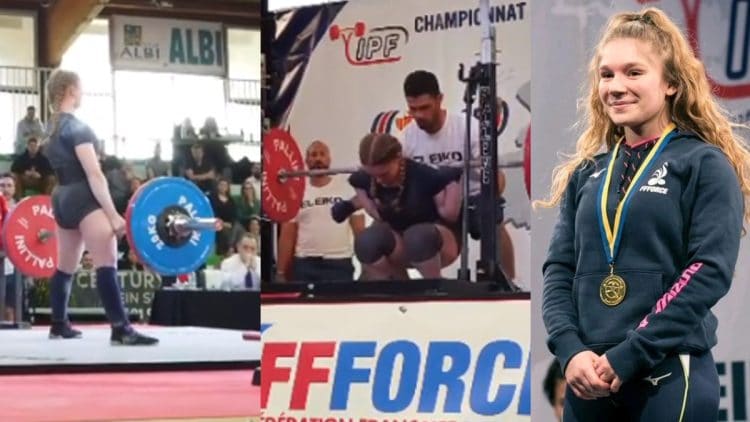 Powerlifter Tiffany Chapon is known for her incredible lifts, and once again, she has managed to post a record-breaking performance at the 2022 FFForce French Nationals, which took place on March 19, 2022, in Albi, France. Tiffany also managed to unofficially exceed two All-time Raw World Records in the squat and total events in the 47 kg weight class.

Tiffany Chapon’s heaviest squat came out to be 155 kg (341.7 lbs), which is 2 kg (4.4 lbs) heavier than the current IPF World Record, which is also held by her. Tiffany set the record at the 2021 EPF European Classic Powerlifting Championships. This means that Tiffany Chapon performed the heaviest squat in the history of the 47 kg weight class.

Tiffany’s total for the competition was 418 kg (921.5 lbs), which is also 10.5 kg (23.1 lbs) heavier than the current IPF World Record, which is held by Wei-Ling Chen. Wei-Ling set the record at the 2015 IPF World Classic Powerlifting Championships. Tiffany Chapon’s Total is also the heaviest in the history of the 47 kg weight class.

You can watch all of Tiffany’s lifts here:

This is Tiffany Chapon’s second career win at the FFForce French Nationals, as she also won it last year. She now holds eight French national records. Tiffany managed to do this by claiming all records in both the 43 kg and 47 kg weight classes. She also holds the U47 Official IPF World Record and is the 2021 World and European Champion.

Tiffany Chapon’s next competition will be the 2022 IPF World Classic Championships, which will take place from June 6-12, 2022, in Sun City, South Africa. At this competition, Tiffany will attempt to make these World Records official and potentially improve them even further.