A TikToker working at a gym showed a video of a man recording her butt during a workout. 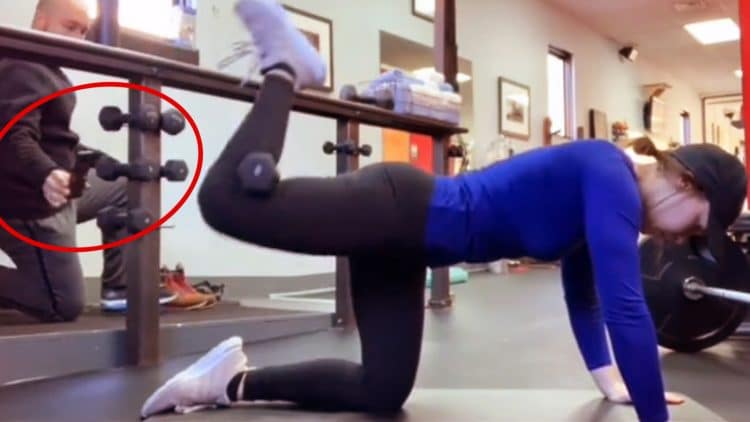 A fitness trainer shared a video on TikTok that is garnering a lot of attention. While recording herself during a workout, she caught her co-worker either recording or taking pictures of her backside without consent.

A TikToker who goes by dani_dfitness recently took to the social media platform to share her negative experience at the gym she works at. A male co-worker is caught on camera stealthily whipping his phone out to record and/or take pictures while the young lady is performing weighted donkey kick exercise. After committing the dirty deed, the man is seen scurrying to tie his shoelaces in order to camouflage his wrongdoing.

Recently, women have taken to social media and complained of men harassing them at gyms. Insofar that some women have begun wearing makeup as a repellent. The unwanted help or attention takes many forms.

Just a few days ago, another woman flocked to the app and called out a man who approached her while she was lifting weights.

She alleges that the man offered unwanted help in the weight room and actually followed her around the gym prior to the viral moment spreading across the internet. It appears this problem is a pervasive one.

For the fitness trainer, well, she caught the co-worker spying on her in live time and she quickly tells him that he’s on video. Below you can find the viral interaction.

Answer @fifth_wheel_living then it got taken down for bullying 🥰

In response, her co-worker plays it off despite seemingly being caught red-handed.

“I am? Why are you recording?” the man asks.

According to the fitness trainer, the video of her catching the man recording her has been taken down due to bullying. The origins of the story resurfacing on Dec. 14 stem from a TikToker asking other users about their viral moment of 2021 on the app.

We don’t know her but we love her🥺

Related: Female TikToker Found a ‘Life Hack’ That Keeps Men From Bothering Her At The Gym

After recording herself, she caught a co-worker taking pictures of her backside during an exercise. While this may not be the best moment for a viral video, at least she caught the perpetrator. The fitness trainer appears to be taking it all in good stride, but hopefully, in 2022, the creepy encounters begin to subside for ladies at the gym.

Gyms and fitness centers have become a breeding ground for hostile situations following the inception of TikTok, a streaming platform...