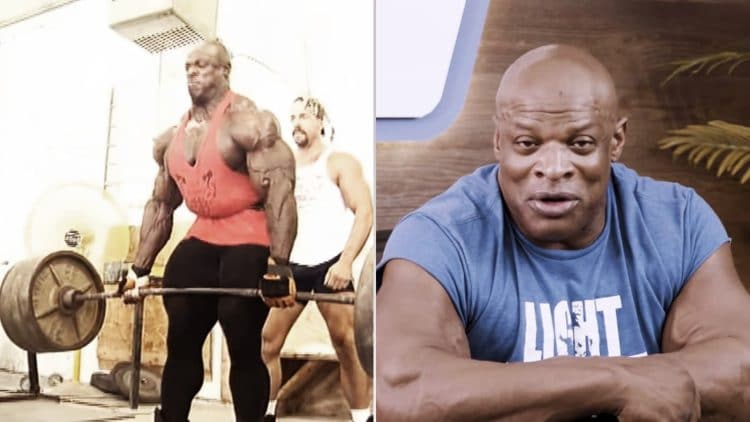 Eight-time Mr. Olympia winner Ronnie Coleman has adapted well to the internet and social media following retirement from professional bodybuilding. Ronnie Coleman runs a successful YouTube channel and shares engaging content regularly with his 1.17 million YouTube subscribers. Reaction videos are an interesting aspect of YouTube and Ronnie recently shared a reaction video of his famous 800lbs deadlift. Ronnie Coleman had executed the lift a few weeks before competing at Mr. Olympia 2000 where he won the Mr. Olympia title for a third consecutive time.

At the beginning of the video, Ronnie Coleman stated that the 800lbs deadlift was done five weeks before Mr. Olympia 2000. However, he added that the deadlift wasn’t planned and he hit the gym that day for a usual workout and went up to 800lbs as he felt great that day. The 57-year-old also joked that most of his greatest lifts are captured on camera because when the cameras are on, he is trying to show his best!

“I was having a real real good day. I was feeling good from the time I started, you know, until the time I got to 800. So I just went to the gym to do a regular workout. I was just like, let me try something different. I tried something different every time you film. That’s why all my greatest lifts are on video.”

This was not the first time Ronnie attempted an 800lbs deadlift before the meet. The 8-time Mr. Olympia winner revealed that he had attempted a similar lift a few months before the same event. He strained his bicep in the process and could not succeed. However, during the filmed attempt, Ronnie felt healthy and went through two flawless reps without any problem.

It might seem that the 800lbs deadlift might have required some pondering over before making the attempt. However, the 57-year-old stated after he executed four 750-deadlifts that day, he knew it was time to take the giant leap again. Considering the event was a mere five weeks away, Ronnie was hoping not to get injured in the process. In addition to that, Ronnie was not de-carbing at the time and stated that the lift felt light to him!

“I’m not always this strong but on this day, I was fully carved up this day. My muscles were real good and full. My strength was exactly where I wanted to be. I was probably my strongest five weeks out. Strongest I’ve ever been,” Ronnie Coleman said while looking at the video of his 800lbs deadlift.

Ronnie Coleman successfully deadlifted 800lbs for two reps. One of the highly appreciated posts on YouTube, the video has close to 8 million views and stands as the testimony to the immense strength Ronnie Coleman possessed at the zenith of his competitive abilities.

Considered by many as one of the greatest bodybuilders of all time, Ronnie Coleman is a retired open division bodybuilder best known for winning the Mr. Olympia title eight times. Born in Monroe, Louisiana, Ronnie worked as a police officer in Arlington, Texas from 1989 to 2000 and as a reserve police officer from 2000 to 2003.

Following the advice of his colleague in the police department, Ronnie Coleman started training for bodybuilding, winning Mr. Texas competition in 1990 in the heavyweight division and overall. Ronnie competed as a pro for the first time at the the1992 Chicago Pro and never turned back after winning the first pro championship at the 1995 Canada Pro. Ronnie went on to win Mr. Olympia eight consecutive times from 1998 to 2005 defeating the greatest bodybuilders of his time including Flex Wheeler, Shawn Ray, Lee Priest, and Jay Cutler. Following a fourth-place finish at the 2007 Mr. Olympia, Ronnie Coleman retired from professional bodybuilding.