A TikToker shared a video of a man surprising her during a powerlifting workout which could have resulted in injury. 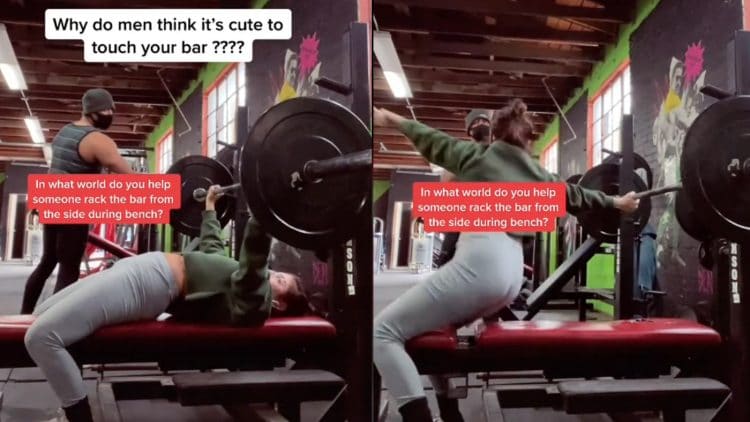 During a weight lifting exercise at her gym, a TikToker’s video has taken the world by storm after a creepy man ran to spot her without consent. According to the TikToker who shared the video, the man allegedly followed her around the gym before attempting to help with her powerlifting.

At first, it may seem innocuous but what the man did has caused a major stir online and in just about every fitness corner on the popular streaming application. For anyone with experience training at a gym, surprising someone during a strenuous lift is downright dangerous.

Unfortunately, this problem is pervasive, to the point that women are having to put makeup on their necks to act as a repellent to these unsolicited advances. The man also attempted to help her with the weights before she shooed him away and told him to leave.

“I thought I lost this video. This man had been following me around the gym trying to “help” me my entire lift. 😩 reasons I need a fucking home gym. ” The TikToker shared.

I thought I lost this video. This man had been following me around the gym trying to “help” me my entire lift. 😩😩😩😩 reasons I need a fucking home gym. #girlswholift #staysafe #creeper #gymcreep #anxiety #foryou #gymtok #fittok #girlswholift #powerliftingwomen #squat #quarantine

TikToker Shares Video Of Her Being Hassled At Gym

The video has already garnered over 2 million views. In the comment section, many people reacted to the man’s brazenness to interrupt someone who is mid-lift during a tough workout. One commentator immediately addressed how dangerous the situation could have been.

“He could [have easily] injured you just by doing it,” a commenter said. “Glad you stabilized it.”

Another woman that commented also admitted that she had a similar run-in with an older man when she was working out at her local gym. Then another bystander chimed in who claims they work as a gym associate, and mentioned that they would have revoked the man’s membership for his unwanted help.

“Last week after finish my last set on the leg press [an] older man went and started rubbing my knee… telling me to be careful,” one woman stated.

“I had to stop going to this gym [because] I felt so unsafe all the time!” another commenter wrote.

“As a gym attendant, if you showed me this video he would have his membership revoked that day and you would be escorted out at the end of your sesh,” one TikTok commenter said.

After fans requested a follow-up story to the viral video she shared, the TikToker suggests that there is no story and had the following to say.

“There’s no story,” @dezsquats said in a follow-up TikTok. “He was following me around the gym, and I just went off and told him not to touch my fucking bar.”

Reply to @mommyandlogi thankfully that fucking weirdo didn’t even try to defend himself he just went straight back to corner he came from. I don’t go to that gym anymore but stay safe ladies ✨ #CustomersMostLoved #girlswholift #AEHolidayForever #staysafe #ShareTheMagic #creeper #powerliftingwomen #gymstalker #gymcreep #harrasmentawareness

@dezsquats explain that she no longer goes to that gym now:

“He never tried to defend himself or anything,” she shares in another follow-up. “He kind of just got scared and went back to doing whatever workout he was doing.”

The video showing a man attempting unoffered help to a woman powerlifting has gotten the world in a stir for good reason. During exercise, injury is always a possibility and safe gym practices should be enforced for anyone getting their workout done in a public setting.