As the Tokyo Games draws near, get to know some of the top weightlifters from Team USA, in Katherine Nye, Mattie Rogers, and CJ Cummings 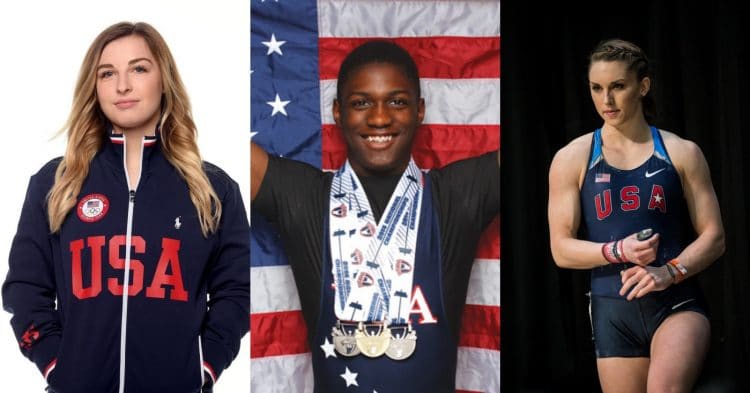 The Olympic Games are back, with the 2020 Tokyo Games slated for going from July 23rd — August 8th. Before the games kick off, we take a look at some of the brightest stars to keep an eye out, in the weightlifting squad for Team USA.

For the 2020 Tokyo Games, weightlifters will be competing in 10 days of the contest, split between two blocks of five days. Each of these days will end in medals awarded, with each day featuring individual weight classes.

Ahead of the contest, most of the weightlifting talk has been surrounding the inclusion of New Zealand’s trans weightlifter Laurel Hubbard. That said, there are a lot of other interesting aspects to the contest, namely with Team USA and their incredible athletes.

The last several months have seemed to suggest that the Americans will have some record best performances at the Tokyo Games. So we thought it important to help fans get to know some of the top athletes that will represent Team USA on the weightlifting platform.

Easily one of the most promising athletes that Team USA will be bringing to the table, this 22-year old weightlifter is making her Olympic debut in the 76kg division. She will compete in the Tokyo Games on Sunday, August 1st.

What makes Nye so fascinating is not just her young age, but the amount of accomplishments that she already has reached to this point. Not only is she the holder of a junior world record, but she also has 9 American records, and the youngest athlete to win an overall title at a World event.

There is a lot to look forward to with Katherine Nye, not just at the 2020 Tokyo Games, but in the years to come. With her being so young, she has a lot to offer Team USA.

Competing on Wednesday, July 28th, Clarence “CJ” Cummings will represent the 73kg division for Team USA, during the 2020 Tokyo Games. Like the previous entry he is another young talent, but at 21 years old he already has some serious experience and shown a ton of skills.

Earning weightlifting medals as early as 12 years old, Cummings seemed destined to make it to the Olympic stage at some point. That time will come this year, after he has scored more than 20 American records in the Youth, Junior, and Senior divisions across four weight classes, and four wins at the Junior Weightlifting World Championships.

With his lengthy time competing and already proven levels of success, it seems likely that CJ Cummings will end the Tokyo Games with a medal for Team USA. It will be interesting to see him fulfill his potential.

Our final entry into the list of top Team USA weightlifters to watch at the 2020 Tokyo Games is 25-year old Mattie Rogers. This Pan American champion will make her Olympic debut in the 87kg division, competing Monday, August 2nd.

After narrowly missing out on the 2016 Olympics, Mattie will compete on the back of a strong last several months. Here she was able to accumulate several American and Pan American Records, having bounced around the 69kg and 71kg divisions.

With the 87kg division in her sights, Mattie has clear potential to deliver a medal for Team USA during the Tokyo Games. She has been working hard to advance her game over the years, and it is all building up to this point.

The 2020 Tokyo Games may have been delayed, but it is now set to take place over the coming weeks. It is going to be exciting to see if Team USA can walk away with medals in weightlifting, and if these three promising young lifters will prevail.