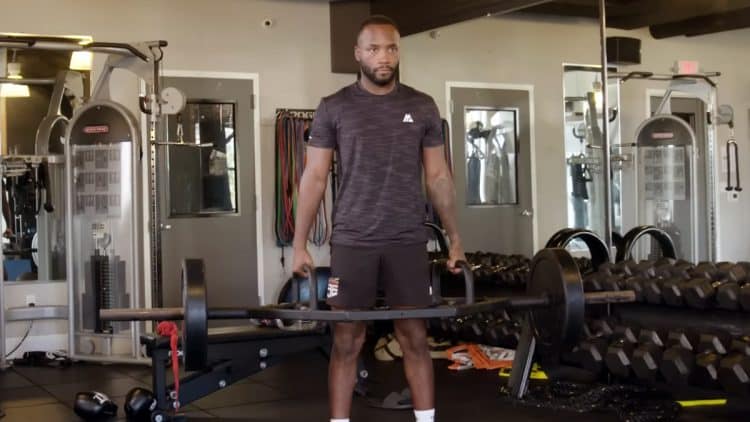 UFC welterweight champion Leon Edwards is renowned for his agility and quick movement as a mixed martial artist. In a recent YouTube video, Edwards shared the workout he utilized during the off-season.

Leon Edwards started his professional mixed martial arts career in June 2011 after a brief stint as an amateur fighter. Hailing from Kingston, Jamaica, Edwards’ family moved to England when he was a child. He admittedly grew up around criminal influences. ‘Rocky’ found himself in trouble as a teenager, prompting his mother to send him to a gym to learn how to approach combat situations.

Edwards’ potential was evident from the moment he hit the mat. He made a name for himself competing on the regional circuit in the UK under Fight UK MMA and BAMMA promotions, where he won welterweight gold for the first time. In 2014, he got signed to the UFC, the most elite MMA promotion in the world. After dropping a razor-thin split decision to Claudio Silva in his debut, he got back in the winning column.

‘Rocky’ faced former UFC welterweight champion Kamaru Usman for the first time in Dec. 2015 when they were both promising prospects on their way up. Edwards, whose experitse is striking, succumbed to Usman’s grappling-heavy gameplan. Following the loss, Edwards went on a rampage that saw him go unbeaten in 10 fights, securing wins over veterans like Donald Cerrone, Rafael dos Anjos, and Nate Diaz.

He got the chance to challenge for the title against a familiar foe in Usman at UFC 278 last August. He entered the contest as a massive underdog. Before the fight, many thought Kamaru was on the verge of cementing his status as the greatest welterweight of all time.

Usman asserted his will over Edwards for the majority of the bout. However, Edwards pulled off one of the most shocking upsets in the history of the promotion when he landed a vicious head kick, knocking Usman unconscious with 56 seconds left on the clock.

By the end of the event, ‘Rocky’ etched his name into the record books as only the second-ever British UFC titleholder, the first being former middleweight champion and UFC Hall of Famer Michael Bisping.

In a recent YouTube video, Leon Edwards shared the training program he uses to stay in shape during the off-season.

“Off-season training, I’m not really beating my body up. It’s more just about maintaining a good level of fitness. Obviously, a good level of strength, a lot of strength and conditioning because that helps prevent injuries also and improve my learning.”

Chest and Back Superset: 3-4 rounds total

Leon Edwards is set to take on Kamaru Usman in the headlining bout of UFC 286 on Mar. 18 at the O2 Arena in London, England. With each fighter holding a win over the other, the rubber match will serve as the tie-breaker.

Military Press vs. Overhead Press – Which One Is Best?