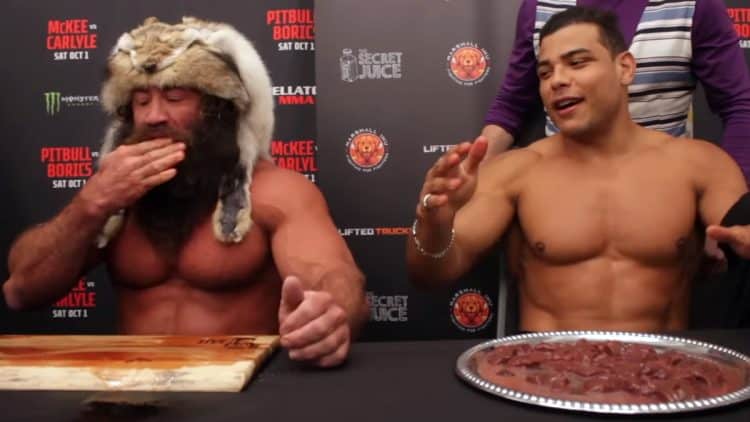 Liver King might have another organ-eating primal on his hands following his latest liver-eating competition. In a video shared on YouTube, Liver King was accused by Costa of cheating after noticing that his opponent’s liver was seasoned and sauced.

Known for living by the nine ancestral tenets, Liver King rose to prominence courtesy of his jacked physique and his affinity for eating raw organ meat. He believes this ancestral lifestyle has helped him reach what he refers to as his ‘highest and most dominant form.’

Many have questioned his commitment to the ancestral lifestyle, chiefly among them is popular podcast host Joe Rogan. He suggested that Liver king’s larger-than-life persona is a shtick and doesn’t believe that the fitness influencer has a natural physique. This prompted Liver King to call out Rogan, though the two have yet to settle their differences face-to-face.

In one of his latest collaborations, the 45-year-old joined top UFC middleweight Paulo Costa and Bellator’s Lightweight Champion Patricky Pitbull for a one-pound liver eating contest. And while all signs pointed to Liver King dominating the match, Costa believes foul play contributed to the meat-eating victory.

Paulo Costa on Liver King Showdown: “He Cheated That Motherfu**er; I Had No Salt, Sugar, or Sauce’

In two videos shared by MMA reporters The Schmo and Mike Bohn, top UFC middleweight Paulo Costa gave his thoughts on Liver King devouring the pound of liver before he could. Costa issued these statements at the Friday weigh-ins for Bellator 286.

“Yes man. I tried; I did my best. These guys [Liver King] didn’t eat it [properly]. He just swallowed it. Man. My liver had no salt, no sugar, open your eyes, [but] Liver King had sauce, you know. I drank my secret juice to help me, it helped a little bit. Secret juice is not to be mixed together. It’s more to drink alone. To make more effects on your body,” Costa told The Schmo.

According to Costa, the liver eating contest was set up by his coach, ‘captain’ Eric Albarracin, who has also coached the likes of former two-division UFC champion Henry Cejudo.

“This was a great idea. My friend, the captain [Eric Albarracin], had this idea after an ice cream competition he gave up so we placed him by Liver King,” Costa said. “I don’t know yet [what the next challenge is] but we will figure [out] something great to do.”

Costa jokingly said that the fitness influencer cheated because he ate his raw liver with sauce and/or salt and sugar.

“He cheated that motherfu**er. I want a rematch. No. Something else [not eating liver]. Liver King is a big deal, a real deal, he is everything that he is supposed to eat — even with some sauce — he did great,” says Costa.

The organ-eating primal continues to implore others to eat raw meat and to live a similar lifestyle to what he practices with his family of four. The last time we saw the 45-year-old making headlines, he joined Carnivore-diet enthusiast, Dr. Saladino. The two shot a video in the supermarket where they both underlined the problems associated with processed foods and seed oils.

While Costa didn’t go as far as Jesse James West did, he still performed exceptionally well against the CEO of the Ancestral Lifestyle. It appears Liver King’s raw organ-eating movement continues to spread following his latest collaboration with UFC Middleweight contender Paulo Costa.

Check out the contest below:

Bodybuilding legend Ronnie Coleman established himself as an all-time great and knows an impressive physique when he sees one. In...