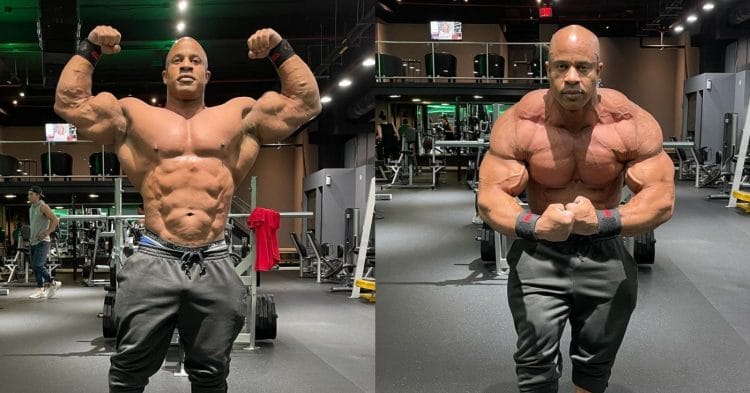 Over the last few years, Victor Martinez has slowed down his competition schedule considerably. However a recent update from the Dominican Dominator has fans buzzing, thinking he could be looking to compete again in 2021.

At 47 years old, Martinez is a longtime veteran in the sport. He has competed in almost every major show imaginable, including nine appearances and several wins at the Arnold Classic, and eleven Mr. Olympias, where he scored as high as 2nd place in 2007.

Despite the fact that he has only competed twice in the last four years, Victor is still in phenomenal shape. He put this on display with a recent update, posted to his Instagram, where he shows an insane physique that looks like it could rival some of the best in the current generation of bodybuilders.

“Current status, training as hard as I can without screaming or yelling one more rep. Unless it’s a special occasion like a sword fight. Don’t count the reps for me because I do count for myself. I’ve never carried a gallon of water to look like I’m serious. I’m always serious about staying in shape. If you think I train to light just remember my light is most people’s heavy. Maybe you are just going too heavy until one day you won’t be able to even do my light,” Martinez wrote.

Victor is not one to normally share a ton of training or physique updates to his social media, but he looks absolutely jacked here. The fact that he can have a physique like this, so long after what many would consider the prime of his career, is astounding.

When Victor Martinez came in second place at the 2007 Mr. Olympia, it was looked at as a mistake by many, who felt that he should have beaten Jay Cutler. Now, it seems like he is looking prepared to hit the stage again, a 14 years later, looking like a complete stud.

To be clear, Victor does not indicate when or even if he will be competing at some point in the near future, actually saying specifically that he likes to stay in shape. However if he looks like that, it seems inevitable that he will have one last go in the near future.

Victor Martinez has not officially retired at any point, so it is not out of the realm of possibility that he will step on stage again. If he does, it seems quite reasonable to assume that he is capable of ending on a higher note than the 9th place score he got at the 2020 Arnold Classic.