Learn how to do this multi-move exercise to lose calories, build your cardio, coordination and athleticism. 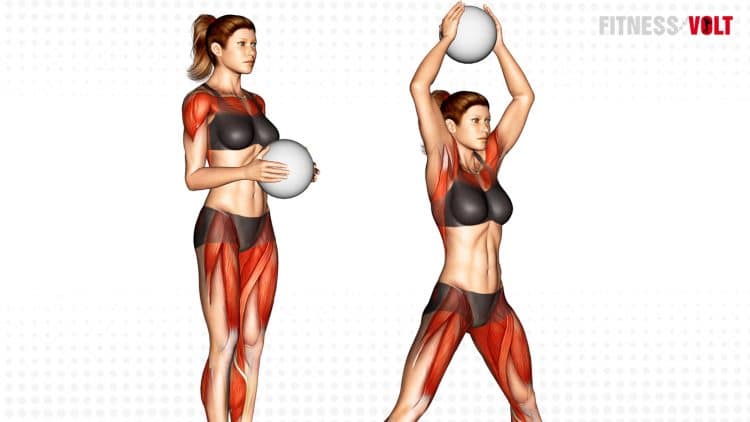 The jack press is like a two-in-one movement that helps to build up your cardio fitness, coordination, and maybe even your shoulder muscles a little too.

It combines the very popular jumping jack which is a calisthenics movement, with an overhead medicine ball press.

Learn how to do it with tips, variations, and more.

While this exercise isn’t the best muscle mass and strength builder, it still works several muscles.

The deltoids or shoulders consist of three heads: anterior (front), lateral (side), and posterior (rear).

The deltoid anterior or front deltoid is one of the three heads (other heads are lateral and posterior) that make up the shoulder muscles. The anterior head works with the posterior head to stabilize the arm while the lateral head abducts the arm from 15-100 degrees. It also works with the pectoralis major to flex the arm when walking.

The deltoid lateral or side deltoid is one of the three heads (other heads are anterior and posterior) that make up the shoulder muscles. This head abducts the arm from 15-100 degrees while the other two heads stabilize the arm. It’s also involved during walking and helps to prevent inferior displacement of the glenohumeral joint when the arm is pressed against the body under load.

The deltoid posterior is the backside shoulder muscle that along with the anterior head, stabilizes the arm during arm abduction (away from the midline of the body). The posterior head works with the latissimus dorsi or lats, to extend the arm when walking.

It also, along with the other heads, helps to prevent displacement of the glenohumeral joint when the arm is adducted under a weight load.

The quadriceps femoris or quads for short is a very large muscle located on the front of the upper leg. It consists of four muscle bellies that include the rectus femoris, vastus lateralis, vastus medialis, and vastus intermedius. The rectus femoris flexes the hip while the other three muscles extend the knee.

The quads are important for many daily activities, posture, the gait cycle, and patellar stability.

The glutes or butt muscles consist of the gluteus maximus, gluteus medius, and gluteus minimus. The gluteus maximus is responsible for most of the butt’s shape, and function and its primary function is to extend and externally rotate the thigh. It can also act as an extensor when force is necessary (e.g. from sitting to standing).

The calves are the muscles on the back of the lower legs. It consists of two muscles – gastrocnemius and soleus. The former is the larger and more superficial of the two and it also has two heads (medial and lateral) while the soleus is large, flat, and located beneath the gastrocnemius.

Because the gastrocnemius also crosses the knee joint, it plays a role in knee flexion.

Both calf muscles meet at the heel to form the Achilles tendon.

The calves function to plantarflex the foot and ankle (point the toes down).

There are several core muscles but the abs and obliques are the most commonly recognized.

The rectus abdominis is fancy for abdominals, also known as the six-pack” muscles. These core muscles are responsible for trunk flexion (e.g., curl up during a crunch), and they assist during lateral trunk flexion (bending to the side).

The obliques (external and internal) are core muscles located on both sides of the rectus abdominis or “six-pack” muscles. They facilitate trunk rotation and contralateral rotation, and with the erector spinae and rectus abdominis, the obliques help with lateral flexion of the trunk.

How To Do The Jack press

As with any exercise, there’s a right and wrong way to do it, especially if there’s a chance for injury. While the jack press is a rather simple exercise to perform, we’ve provided step-by-step instructions to ensure you do it correctly.

Note: Choose a medicine ball weight that you can comfortably press overhead but that’s heavy enough to be a little challenging.

Benefits of The Jack Press

There are a few notable benefits to be had by doing this exercise.

Cardio is important for maintaining good health but it’s also a good way to burn calories which contributes to fat loss goals. Because you’re moving at a decent pace and using your entire body, this makes for a good calorie-burner and your heart will also benefit.

Most Effective Ways To Burn Body Fat Without Doing Cardio

There’s a lot of truth to the saying “use it or lose it” and this is certainly the case for your physical fitness and coordination. If able and your joints allow for it, movements that involve jumping and total-body motion help to maintain coordination, balance, and even athleticism.

Losing fat through cardio-focused activities helps to bring out more muscle tone especially if you do resistance training. Additionally, pressing a weighted medicine ball overhead will help to develop your shoulders, triceps, and core muscles.

Ever get bored with your workout routine? We all have at some point. Exercises such as the jack press using a medicine ball present a new challenge and offers all of the above benefits.

While the jack press is a unique and beneficial exercise, there are a few variations that you can do to mix things up a little.

You could just do basic jumping jacks to get the cardio benefit without having to worry about pressing weight over your head.

If you don’t have a medicine ball, you can still use dumbbells or any similar weights that allow you to move freely.

This variation may be a little more challenging as you have to balance and maintain stability to press the dumbbells in each hand as you jump (unless you hold one dumbbell in two hands). But that’s why it’s a good idea to choose lighter weights to start with and then progress as needed.

Change things up with the scissor jack press. Rather than jumping your feet out laterally, you move them forward and backward past each other while pressing the medicine ball overhead.

There are many ways to include the jack press into your training routine. Here are a few that we think will work for you.

The jack press makes for an excellent exercise to include in supersets.

A superset is two exercises performed back to back for the purpose of keeping blood flowing, saving time, and more.

For example, you could do a set of push-ups and then hop (pun intended) right into the jack press. You’d rest a little and then do this again.

Circuit training is a great way to build muscle and improve your conditioning. You’ll choose a number of exercises and do them back to back with little to no rest in between.

Add the jack press in your circuit training regimes to mix things up and improve your fitness.

You could use the jack press to warm up your joints before getting into a workout. Do a few sets before a cardio or resistance training session.

Check out these useful warm-up movements.

The jack press makes for an excellent finisher regardless of the routine that came before it. You could set a timer and do it to help you improve your cardio and burn calories.

It’s not a mass or strength builder but, like many exercises, has its place in a training routine. And as you can see, there are a few variations you can use to mix things up and there are different ways to incorporate it into your training regime.

Are you an overhand or underhand grip type of exerciser? Some people choose to have the best of both worlds...

Burpees need no introduction. Most people know them as the exercise where the soul leaves the body for the duration...

The Best Post-Gym Cool Down Exercises

An effective workout should have three components. Firstly, you should start with a warm-up to prepare your muscles and joints...