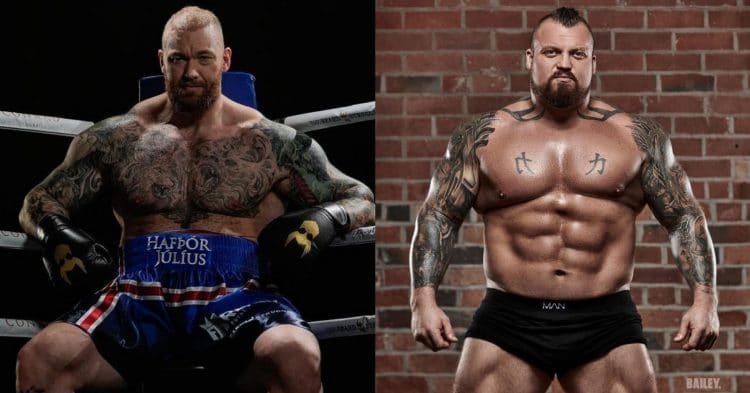 The boxing match between Hafthor Bjornsson and Eddie Hall is drawing closer with each passing day. With the bout only a few short months away, things have begun to heat up between these two retired strongman athletes.

While they will be meeting in the boxing ring, the beef between Bjornsson and Hall stems from their time in the sport of strongman. The two had differing opinions on each other’s attitude towards competition, not to mention the rivalry between them stemming from Thor taking Eddie’s world record deadlift.

Now they will have the chance to settle their beef with their fists, as they are set to face off on September 19th. Ahead of the fight, both men have been honing their crafts and getting in the best shape of their lives, with Thor even taking on a pair of exhibition fights to get his feet wet.

Following his most recent exhibition, Hafthor Bjornsson did some boxing training with powerlifter Larry Wheels. The two had a fun session, and after the fact Larry made it clear that he was rooting for the Icelandic champion, telling him to knock the head off of Eddie Hall.

It seems that this comment from Larry has been actualized in the form of a fan made poster from graphic designer Taurus. Wheels posted the image to his Instagram, where Thor reposted it in order to talk a little smack to Eddie.

“Had no clue @larrywheels was psychic 🔮🧿” Bjornsson wrote.

These comments got back to Hall, who also shared the image to his Instagram. Here he fired shots at Bjornsson for suggesting that this is how the fight will go, denouncing him for his unsportsmanlike attitude.

“Great artwork from Thor and also great to see his professionalism and sportsmanlike behaviour has transferred over from strongman into boxing 👏
Iv never felt so confident over an upcoming fight in my life so stuff like this just makes me laugh. Il be sleeping like a baby after what I just saw at the weekend and that deluded numb nuts hasn’t a clue what’s coming 😊 ” Hall wrote.

Hafthor Bjornsson has been a lot more open about his boxing progress than Eddie Hall is, so there are still a lot of questions as to how this fight will go. One thing seems to be for sure though, and that is the fact that these two are almost certainly going to be throwing bombs at each other.