While he was in Dubai, Hafthor Bjornsson hit the gym with Larry Wheels for some boxing training and sparring 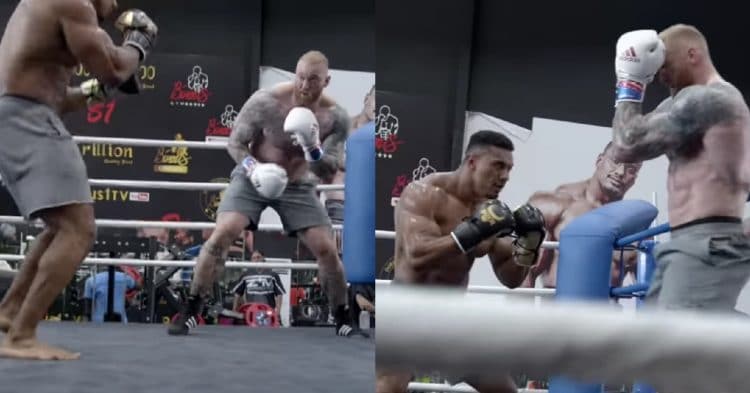 The last time they trained together, Hafthor Bjornsson diverted from his current training priority to do deadlifts with Larry Wheels. Now Larry returns the favor, by doing boxing training and sparring with The Mountain.

Bjornsson found himself in Dubai to compete in his second exhibition boxing match, ahead of his real bout with Eddie Hall this September. This was an exciting, back and forth contest, that saw both men getting staggered.

Also competing on the same event was Wheels, who was having an arm wrestling super fight rematch with Schoolboy, which ultimately did not go his way. So of course, with these two fitness superstars being together, they had to train together again.

The last time these two hit the gym together, Larry Wheels and Hafthor Bjornsson did some deadlifting training. Although the Icelandic strongman holds the deadlift world record, he has not been doing a lot of deadlifts recently, with his attention being focused on boxing, but he still hit solid numbers with the powerlifter.

This time around though, Larry decided to join Thor on his boxing training. With this being a new venture for Larry, Thor got to show him the ropes a bit, in a training session that both men uploaded to their YouTube channels.

While getting their hand wraps on, Wheels and Bjornsson shared some good conversation Larry asked Thor how he felt the he scored the knockdown over Simon Vallily in their boxing match.

“It feels nice, but at the same time it passes, you know. I could have gone all in, but then he could have caught me. I had to be smart with my moves,” he said.

In return, Bjornsson asked Wheels about his arm wrestling match, which Larry admitted to being disappointed in the result. However he was happy with the event as a whole, revealing that they had an unofficial match backstage, where Larry beat Schoolboy three times with the left hand.

“I love (arm wrestling). I’ve taken many beatings, that was just one of many I’ve taken over the last year. So that’s not going to stop me. Nothing’s changed really. It’s just a matter of time before I start giving the a— whoopings.”

With the pleasantries out of the way, Hafthor Bjornsson and Larry Wheels started their warm-up. They did some footwork exercises, to get Larry used to being light on his feet, before working on some combinations.

From there, the two laced up the gloves and worked the heavy bag. After a few rounds of this, they took a break before doing some light sparring in the main gym floor.

It was not long before they took things to the boxing ring though, as Wheel and Bjornsson got a little more serious. While it was still lighthearted, they moved around the ring with both men landing a few shots on each other.

After the sparring session, the two had another conversation about their future endeavors. It was here, that Larry showed his support for Thor while he took some shots at the strongman’s rival, Eddie Hall.

“I’ll be right there with you while you train for Eddie. Everyone knows I’m on team Thor, it’s no secret. Take his head off please,” Wheels told Bjornsson.

It was fun to see Hafthor Bjornsson and Larry Wheels moving around the ring together and sparring. The idea of a real fight between these two might just be too crazy for comprehension.