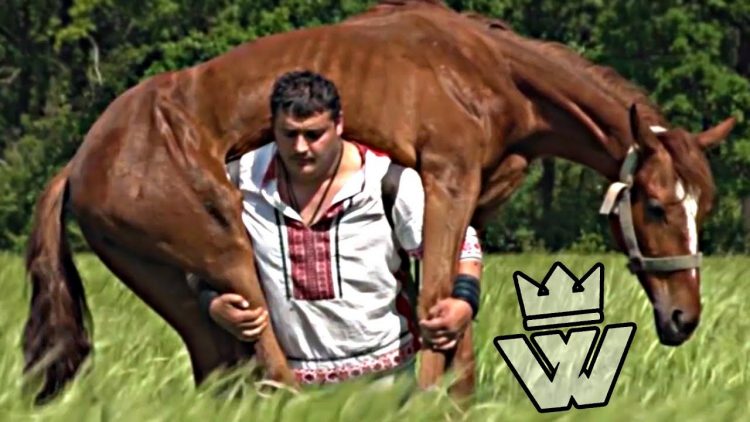 Dmitriy Khaladzhi a hulking Ukrainian “Super Human” gives new meaning to the term “hard as nails.” He may not be a bodybuilder. He may not have a sculpted physique that impresses – but he does have some mind-blowing insane strength that he’s not afraid to show off again… and again… and again.

In the amazing video below, you can see Dmytro Khaladzhi performs extraordinary feats of strength including bending a metal rod with his teeth and carrying a fully grown horse.

Khaladzhi a Ukrainian strongman and former circus performer, 38, also deadlifts a saloon car and allows a truck to run him over.

We don’t know much about this strongman but a dubious Wikipedia page dedicated to him, claims he holds 63 Guinness World Records.

According to the information provided on the page, he can lift a 335-pound stone with one hand, binding six 20cm nails in 90 seconds and lying down on a bed of nails while three concrete blocks weighing over 1,500 pounds were smashed with sledgehammers on his chest.

He also the winner of bench press competition at the first Ukrainian Drug-Free Powerlifting Federation event is also listed as one of his many achievements.

Check out the above video of the beast!

Amanda Nunes: Cris Cyborg Fight Is The One ‘Everyone Wants To See’

The Most Scientific Way To Add Strength And Size To Your Glutes, Quads & Hams