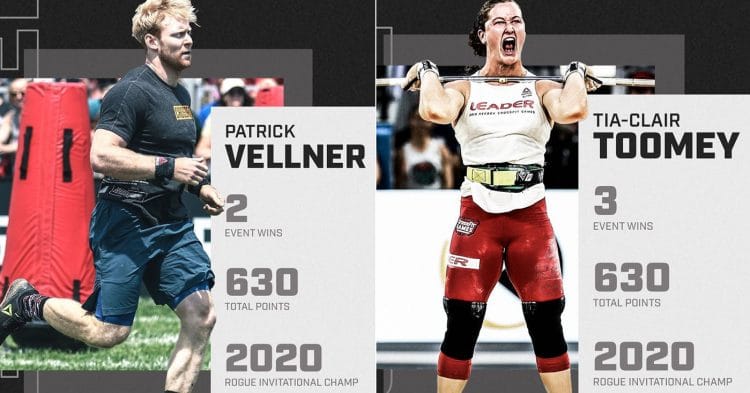 Over the weekend, the 2020 Rogue Invitational CrossFit event was streamed from athletes’ gyms due to the current health crisis situation. Throw in the recent inappropriate comments from former CEO Greg Glassman and things were destined to be a lot different this time around.

There were two days of competition for the event and 35 participants in total (18 men and 17 women).

However, there could only be two winners, who not surprisingly, were Patrick Vellner and Tia-Clair Toomey. Vellner’s best performance came in 2018 when he was the CrossFit Games’ runner-up. Toomey, on the other hand, won her third straight CrossFit Games championship last year and is the defending Rogue Invitational winner.

Day 1 involved 3 events and some pretty impressive performances including that of Sam Briggs who put on a show with 211 power snatches in the Last Man Standing event. Then you had Haley Adams who was victorious in event 3.

Here are the event details for day 2.

Chandler Smith showed some big heart during the competition, performing 50 power snatches as fast as possible on day 1, of which he achieved without a hitch. He was able to push through event 4 with 360lbs to get the win with Vellner right behind him with 350 lbs.

Toomey took the win on the women’s side with a 270lb liftoff with Laura Horvath coming close but not quite. Although, it put her in second behind Toomey.

For the men, Colten Mertens would get heat 1 with 15:34, however, this would prove to not be enough as Björgvin Karl Güdmundsson ultimately took the event after battling it out with Noah Ohlsen. Gudmundsson would end up with a time of 13:44 which was enough to hold off Noah Ohlsen who slowed at the end.

As a result, Vellner and Panchik were able to secure two spots above Ohlsen in the event.

For the women, Amanda Barnhart came out of the gates with a mission, turning in a time of 14:24. Katrin Davídsdóttir clocked 16:13 for second and Brooke Wells had 17:38 for third.

But Iceland’s Sara Sigmundsdottir was able to breeze past the competition in the handstand push-ups, finishing in first with a time of 13:16. Toomey secured the second-best time of 14:05.

This was the final event of the competition and Colten Mertens absolutely dominated the competition. He had a large lead over the rest of the field and was able to prevail victorious with a time of 2:42. Then it was Smith who took second in the event.

Noah Ohlsen made 3:30 to reach the podium and Vellner’s 3:35 would secure his overall competition win.

Toomey finished with a time of 2:51 to get her the overall win and Barnhart and Saunders both finished at 3:18.

Patrick Vellner and Tia-Clair Toomey would both finish at the top of the heap and as a result, took home the $50,000 cash prize.

Overall, there were some very challenging and close performances. Although, two of the biggest names in CrossFit would convincingly grab the victory in the men’s and women’s category.