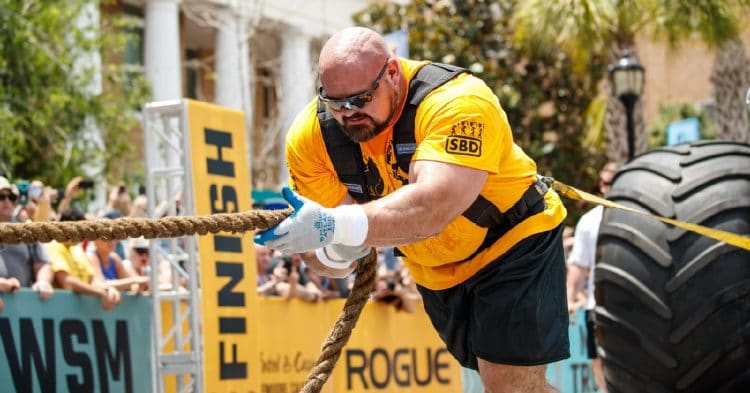 The 2020 World’s Strongest Man is upon us, and strongman fans around the world are buzzing with anticipation. This is a guide to watching the event, and following the action from Bradenton, FL.

After a year of uncertainty and confusion, fans are excited for this year’s WSM. Athletes from around the world will be coming together to put their skills to the test to see who can prove themselves to be the strongest on Earth. Although many of the typical fan favorites are not competing at this year’s event, there is a ton of hype around those who will be competing, such as Brian Shaw who is looking to earn his fifth WSM title.

Related: Can Brian Shaw Earn A Fifth Title At The 2020 World’s Strongest Man?

The 2020 World’s Strongest Man goes down in Bradenton, Florida from November 11-15th, at Holmes Beach on Anna Maria Island. Wednesday and Thursday will see 25 athletes compete in the qualifiers. Then after a day of rest, the finals will commence on Saturday and Sunday, with the top ten competing for their chance to be crowned victorious.

Unfortunately, the action will not be aired until some time next month. The full broadcast of the WSM will be played on CBS and CBS Sports in the United States, at a date in December, still to be determined. Additionally, it is known that the UK will play the broadcast on Channel 5, on December 26th, 2020.

As disappointing as this may be, you do not have to wait that long to get access to some of the action from Florida. This year the WSM announced that they will be doing a Facebook exclusive live stream for $1.99 a day, starting the day before the event begins. Although this will give you access to interviews and backstage content, the most alluring aspect to this bonus content is the fact that they will apparently be providing some of the results as the contest unfolds. So if you are able to spare the dough, you can get premier access to all the strongman content your heart desires.

This year’s World’s Strongest Man has suffered some blows to its roster, due to injuries and other unforeseen circumstances. Nevertheless there are still plenty of exciting people from around the world who will put their hearts on the line for this competition. Below is the list of athletes currently expect to compete.

The 2020 World’s Strongest Man is sure to be an event filled to the brim with exciting and competitive events, featuring some of the best in the world.

Stay tuned to FitnessVolt for coverage of the event throughout the week, including some exclusive interviews and other juicy content for you to sink your teeth into.